Sometimes we think whatever Apple makes will sell in millions. The iPhone X released back in November 2017. And though many analysts claim the Cupertino-based manufacturer has cut the initial capacities for this device due to poor demand, the actual numbers say the contrary. Yesterday, Strategy Analytics published a report about the global smartphone shipments in Q1 2018. According to it, the Apple iPhone X continues leading the list. 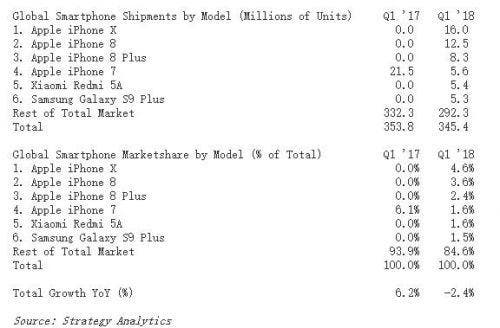 As the table shows, the global smartphone shipments reached 345 million units in Q1 2018. Seems cheaper models should sell better, but we see the iPhone X was the world’s best-selling smartphone with 16 million shipped units. This is the 5% of the market. What’s more interesting, this phone continues showing quite respectable results for the second quarter running. As Juha Winter, Senior Analyst at Strategy Analytics, said ‘The iPhone X remains the world’s most popular smartphone model overall, due to a blend of good design, sophisticated camera, extensive apps, and widespread retail presence for the device.’

Generally, Apple has shipped over 50 million iPhone X units worldwide since commercial launch. But it didn’t overshadow other iPhone models. So, the Apple iPhone 8 and iPhone 8 Plus shipped 12.5 and 8.3 million units, respectively. These are the second and third places. The iPhone 7 launched way earlier shipped a respectable 5.6 million units and occupies the fourth place. So we have to write down Apple accounts for four of the world’s six most popular smartphones.

As for the fifth place, it is taken by the Xiaomi Redmi 5A, which shipped 5.4 million units and occupies 2% of the market. The sixth place belongs to the Samsung Galaxy S9 Plus. The South Korean manufacturer shipped 5.3 million units and takes another 2% market share.