On May 2, the South Korean manufacturer announced the LG G7 ThinQ flagship with a decent specs list. It is packed with a 6.1-inch full-screen with a resolution of 3120×1440 pixels, a Qualcomm Snapdragon 845 high-end chip, a 4GB of RAM, a 64GB of internal storage, a 16MP rear dual-camera, and a 3000mAh battery. Seems this handset can boast of the features it comes with. But we should understand whether all of them perform well in real life. A few hours ago, PhoneArena came in with an interesting article showing the battery performance of our protagonist. Let’s take a look at the charts in order to find out whether this smartphone is capable of competing with top models. 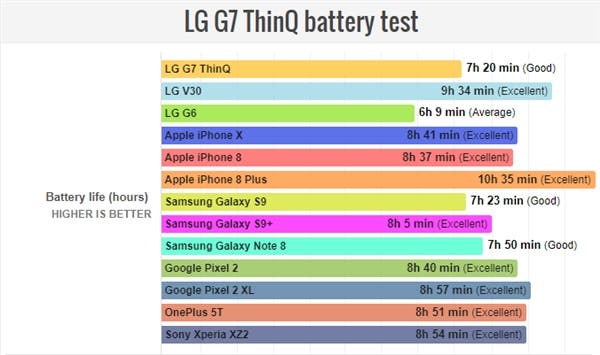 As the screenshots show, the LG G7 ThinQ’s 3000mAh capacity battery scores 7 hours 20 minutes in the endurance test. This is way lower than the 2018 flagship average. Say, there is nothing to compare with the Apple iPhone 8/X. On the other hand, the G7 ThinQ provides results identical to the Samsung Galaxy S9. 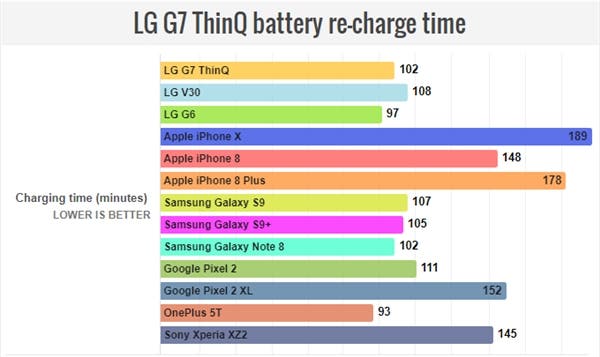 In terms of charging, the LG G7 ThinQ supports fast charging and it requires 102 minutes to charge the phone fully. This is quite an acceptable result when comparing to the same iPhone 8 and iPhone X. Again, this result is almost equal to the S9’s charging time. In the end, the LG G7 ThinQ supports wireless charging, but as you guess, those accessories are sold separately.

So we can conclude, though the LG G7 ThinQ is not an annual flagship. But its battery performance is comparable to the top brand premium smartphones.