Xiaomi doesn’t have many laptops, but all of its models are bestsellers. A similar fate awaits the Xiaomi Gaming Laptop announced at the end of March. There are two variants of the Xiaomi Gaming Laptop. The i7+16GB+GTX1060 is available at 8999 yuan ($1432), and the lower version (i5+GTX1050 Ti) is priced at 5999 yuan ($955). The higher version went on sale April 13 and managed to win the customers’ hearts. The lower variant became available for pre-order on May 9 only. Today, the company announced this version will be available for purchase starting tomorrow, May 15. 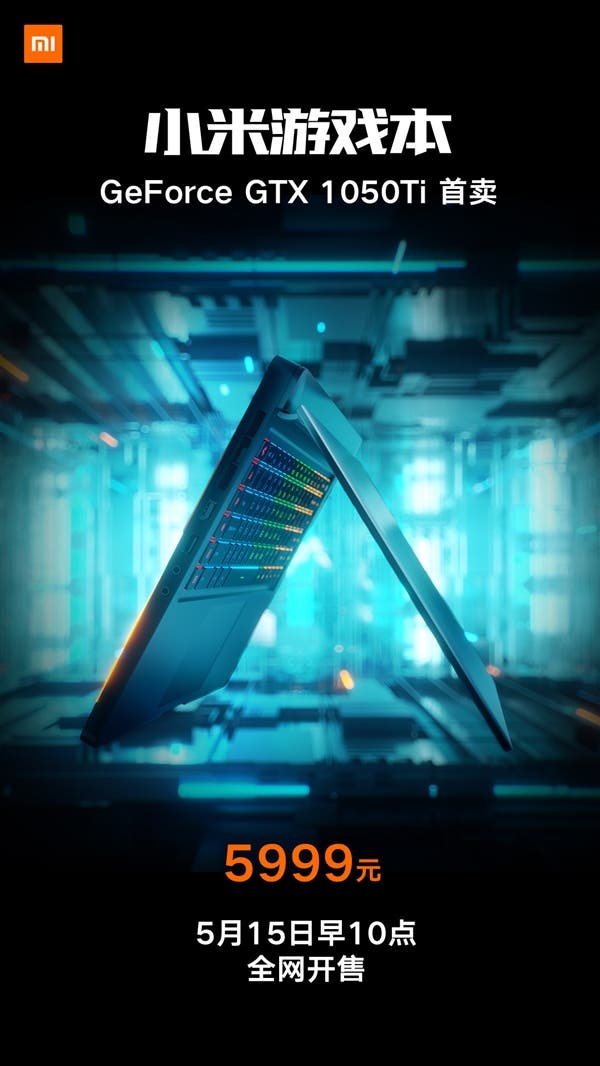 All laptops carrying this brand onboard come with the same logo-less minimalistic design using dark gray as the main color option. The Xiaomi Gaming Laptop can’t be called a thin product, as the body thickness has reached 20.9mm. It also uses a hidden hinge design. Of course, the housing is made of stainless steel.

The Xiaomi Gaming Laptop is equipped with a 15.6-inch narrow-border Full HD screen with a screen ratio of 81%. Unfortunately, this notebook doesn’t come with the 8th generation Intel chips. Instead, it sports the seventh-generation Intel Core i5-73000HQ processor, which is paired with an 8GB DDR4 RAM, 128GB SSD drive, 1TB mechanical hard drive, and GeForce GTX 1050Ti graphics card.

One of the biggest highlights is the cooling system. The heat dissipation area increased by 50%. It also provides a 46% larger opening rate due to the stainless steel used in the grid. There is also a 3 + 2 large diameter bold heat pipe that increases the thermal conductivity by 25%, while the metal ultra-thin turbine blades help the laptop to reach a maximum speed increased by 20%. Thanks to the special TORNADO key, you can switch to an ultra-fast cooling mode by dropping the temperature from 3-5 degree Celsius within 10 minutes.

At last, the Xiaomi Gaming Laptop has 4 USB 3.0, one USB Type-C, a Gigabit Ethernet, and an HDMI interfaces.