For the smartphone vendors, the only way not to depend on chip makers is to make their own chipsets. It’s clear as day. That’s why Huawei has started making its own HiSilicon Kirin chips back in 2012. Xiaomi is ambitious and it is going to get back the first position in the domestic market in the next quarters. To reach this goal, the company has not to look towards chip makers such as Qualcomm and MediaTek anymore. Last year in February, the manufacturer launched its first mobile chip in face of the Surge S1. Recently, Digitimes reported the next-gen Surge S2 will be announced at the end of this month.

The Xiaomi Surge S2 is said to use an octa-core design with an architecture of 4x A73 + 4x A53 cores. The large cores are clocked at 2.2GHz, while the smaller cores run at 1.8GHz. The Surge S2 will integrate an octa-core Mali G71 graphics card. So we can say it is going to compete with the Huawei Kirin 960. This is quite logical, as the first-gen Surge chip was considered as the main competitor to the Kirin 955, Helio P25, and Snapdragon 625.

Though the manufacturer hasn’t confirmed this rumor, the ARM official account on Weibo hinted that the Digitimes report is true. Anyway, we know Xiaomi will hold a conference at the end of this month. The 8th Anniversary Mi Phone should be unleashed at the event. But if our assumptions are true, the Surge S2 will be announced as well. 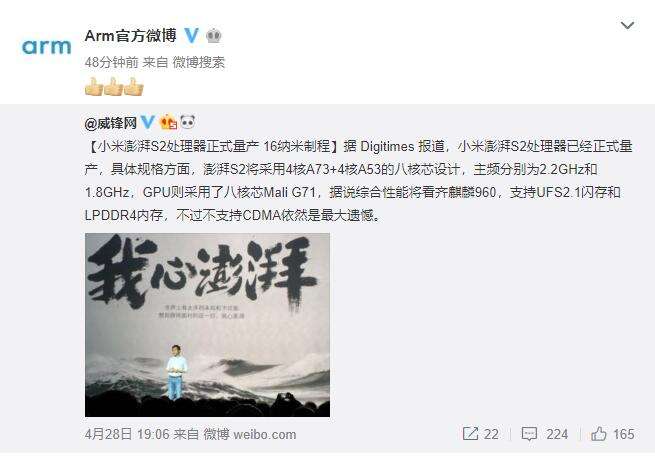 If taking into account the Xiaomi Surge S2’s features, it is positioning the mid-range market. Therefore, this SoC won’t appear on the Xiaomi Mi 7. Most likely, it will debut on the Xiaomi Mi 6C or the Xiaomi Mi 7C. At last, the Surge S2 supports UFS2.1 flash storage and LPDDR4 memory, but it doesn’t support CDMA. So this chip is not attractive for those customers who think this feature is a must.