The Xiaomi Black Shark has become a buzzword immediately after its launch. Before that, the Razor Phone has been the only gaming smartphone. But at this moment, there are, at least, two way more powerful gaming phones in face of the Black Shark and Nubia Red Dev (Nubia Red Magic). The former one stands out due to its powerful hardware and special look. There are two variants. But what’s more amazing, the higher version priced at 3499 yuan ($550) sells better. There have been several bunches of the top model, but all of them were sold out quickly. Today, the manufacturer announced via its Weibo account that this version will become available for purchase again on May 22. It comes with an enlarged storage capacity of 256GB and will cost 3999 yuan ($628). 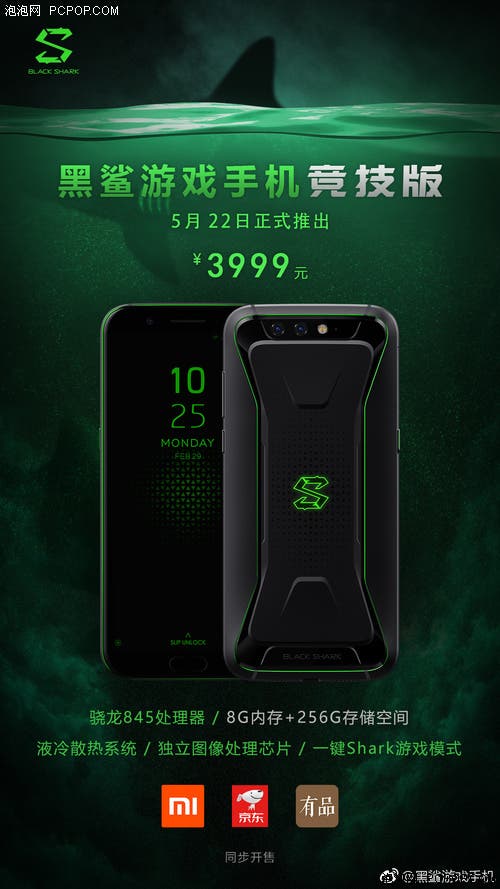 The phone is packed with a 5.99-inch IPS display with a 1080p resolution, 500nits brightness, and an 18:9 aspect ratio. The Xiaomi Black Shark looks quite amazing with a bossy rear panel and strong gaming accent. The Black Shark’s S logo is backlit.

But it wouldn’t be so attractive if there is no powerful hardware under the hood. The handset is equipped with Qualcomm’s flagship chip of Snapdragon 845, which is paired with an Adreno 630 GPU, 8GB of RAM, and 256GB of native storage. Thanks to them, the phone scores 279.464 at AnTuTu and is considered as one of the most powerful phones in the world. There is also a 4000mAh battery supporting QC3.0. At last, it runs on Joy UI based on Android 8.0. It inherits many MIUI elements and allows users to directly log into the Xiaomi account.

One of the innovations used in the Xiaomi Black Shark is the X-type antenna design. The antennas are located on four corners of the phone, but they are closer to the center axis. So it can avoid of the ‘grip of death’ issue when holding in the hand.

Previous Xiaomi Surge S2 To Come At The End of May?

Black Shark 3 with Snapdragon 865 and 5,000mAh battery launches on March 3