Though Meizu is not a big player in the smartphone market at this moment, some of its moves cause a stir in the net. Say, we know it is going to launch a thousand-yuan smartphone in a couple of days. The upcoming model belongs to the Blue Charm series, and it’s dubbed as the Meizu M6T also known as Blue Charm 6T. This phone has been already confirmed by the Ministry of Industry and Information Technology and we know some features that will appear on it for sure. But the processor it will come with still remains a mystery. 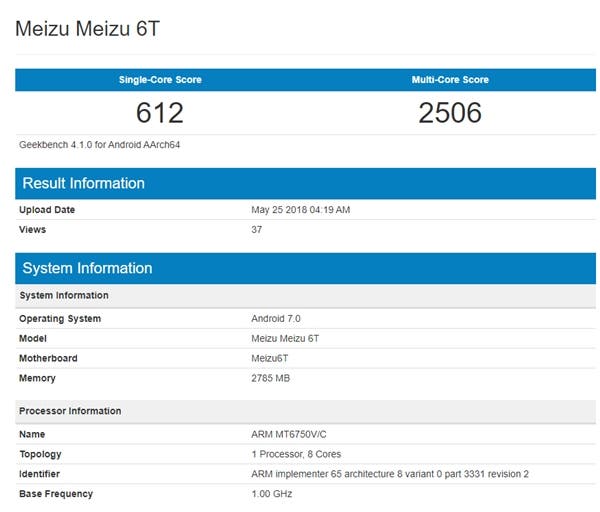 The Meizu M6T has been leaked on GeekBench showing a Spreadtrum SC9850 SoC. Many hurried to think this manufacturer has canceled any kind of cooperation with the Taiwanese MediaTek and for the very low-end models, it will be using Spreadtrum chips. Honestly, there has been every reason to think so. But today, the Blue Charm 6T leaked on GeekBench again. At this time, it showcased a chip identified as MT6750V/C. The MediaTek MT6750 is the manufacturer’s mainstream 4G chip, which is slightly lower than the MediaTek MT6755 (aka Helio P10).

What’s interesting, the first time, when the Meizu M6T leaked on GeekBench, it scored 460 points and 1284 points in a single-core and multi-core tests, respectively. This time, it scored 612 and 2506 points. Thus, the performance is way better than what we’ve seen previously. It is conditioned with the chip architecture and design. The MediaTek MT6750 uses an octa-core A53 architecture with the highest frequency of 1.5GHz. This SoC is paired with a T860 MP2 GPU and can be accompanied by a 4GB of RAM. 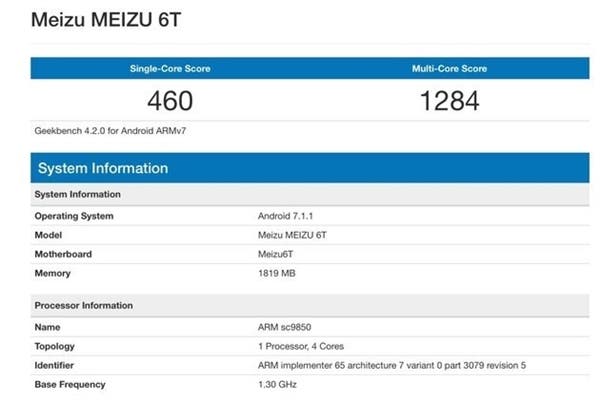 Previously, the alleged Meizu M6T appeared with a model number of M811Q. According to the MIIT information, it will come with a 3GB of RAM, 3230mAh battery, 720p full-screen, 13+2MP rear-camera, rear-mounted fingerprint scanner, and Android 7.0 out of the box.

Previous Galaxy Note 9 could have a variant with 8GB of RAM, 512GB of storage