Samsung has so far refreshed it’s A series of devices with two new models. Those are the Galaxy A6 & Galaxy A8. Recently a Galaxy A9 Star hands on was doing the rounds on Weibo for some time. Today, a new leaked poster shows up determining the launch date of the same handset. We should actually say “handsets” as there is a Lite version of the A9 as well. As per the leaked poster, the A9 Star goes official on June 7 along with its smaller sibling.

The Galaxy A9 Star with model number SM-G8850 was spotted in the wild a few days back. It was seen in classic Black and White shades. Having paid a visit to TENAA, we can some things for sure about the internals of this device. The A9 Star has a hefty 3,700mAh battery so it doesn’t seem like it’s a reincarnation of the Galaxy A9 of old even though it uses the A9 moniker. Because the A9 was a monstrous phone with a 5,000mAh battery. Also, the A9 Star bears a 6.28-inch AMOLED display with a resolution of 2220 x 1080 and an aspect ratio of 18.5:9. 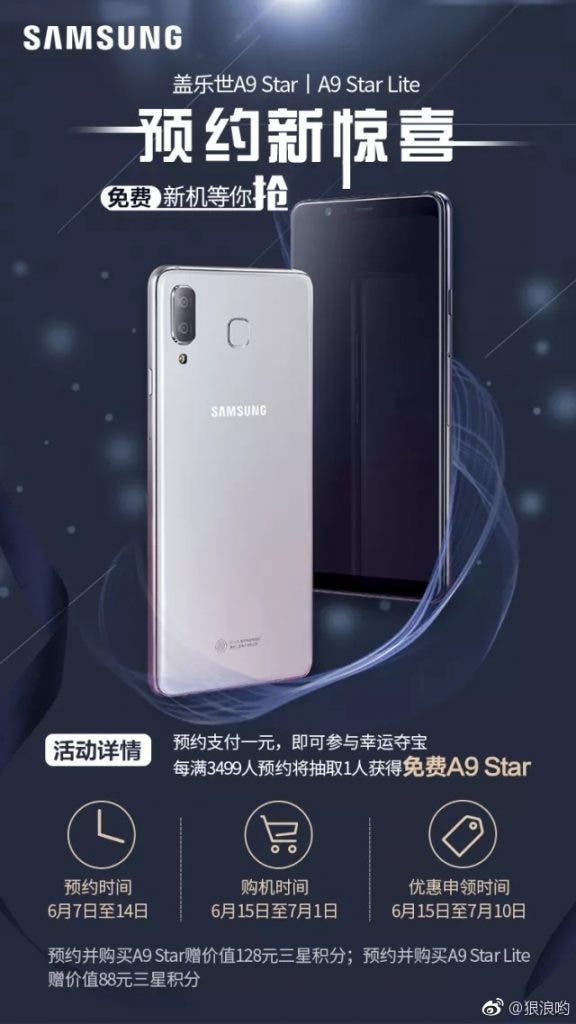 The model SM-G8850 is set to run Android Oreo with the backing of 4GB of RAM and 64GB of storage. This is the standard variant though. What the smaller Lite variant hold in store isn’t yet known. Although, we can predict obvious differences in RAM and storage at least. Also, the duo looks set to boast of a much-scorned Bixby button.
For now, the handsets launch in China and flash sales start on June 15.

Some reports pointed out the duo would make it to other Asian countries like Indonesia, Malaysia, Singapore, Thailand, and Vietnam. However, we’ll believe this when Samsung declares it officially.