The Snapdragon 710 is an awesome 10nm based chip that trumps the SD660 and it just launched last month. The Mi 8 SE has the first dibs to that SoC and looks like there are already some more candidates. As per a post by Roland Quandt, HMD Global has turned out to be the latest suitor to use the platform.

Quandt tweeted on his handle a day back that the Nokia device that will eventually house the SD 710 is codenamed Nokia Phoenix. Moreover, the estimated launch window for the same smartphone is autumn/winter 2018. Since the SD 710 is an upgrade over the SD 660, it follows that Nokia could refresh its current SD 660 devices with the new chip. This makes us assume that the new device could be an upgrade of the Nokia 7 Plus. However, this is just us drawing some logical conclusions. It could equally be possible that we see a completely different device. Fret not, even if don’t know yet, there’s plenty of time for leaks to gather momentum before Autumn or Winter. 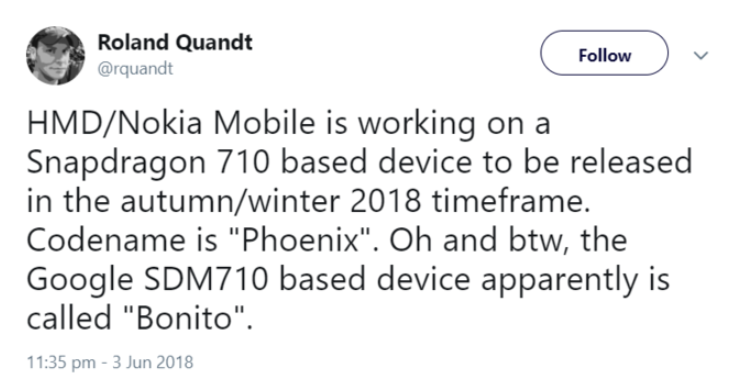 Besides the Nokia Phoenix, Quandt confirmed that Google’s rumoured SD 710 device is real and it is called “Bonito” internally. There’s another device with the same processor in the offing, it is the Vivo Nex S.

Nokia has already rolled out Nokia 2.1, Nokia 3.1 and Nokia 5.1 as part of its 2018 portfolio. We’re still expecting to see an upgrade to the Nokia 8 Sirocco this year which came with SD 835. Also, Nokia is working on ground-breaking penta-lens device rumours of which have cooled down after picking up last year.

Previous Sample photos from the camera of the new OUKITEL K7

Next Video : Compare the design of the UMIDIGI Z2 vs. Huawei P20