Shortly after news of arrival in Taiwan, the Xiaomi Mi A2 has just been put through its paces on Geekbench. A report yesterday suggested that the Mi A2 was soon to appear in Taiwan Despite there being no official sign of such a move from Xiaomi, leaks surrounding the Mi A1 successor have picked up speed. The Mi 6X launched two months ago and if an Mi A2 is going to launch, it should happen any day now.

As for the Geekbench sighting, the Mi A2 looks every bit a Mi 6X, I mean internally of course. It has Snapdragon 660, 4GB of RAM, and Android 8.1 Oreo running as software. But if you’re more into Geekbench scores, the single core test showed 1630 while multi-core tests turned up a score of 4,657. 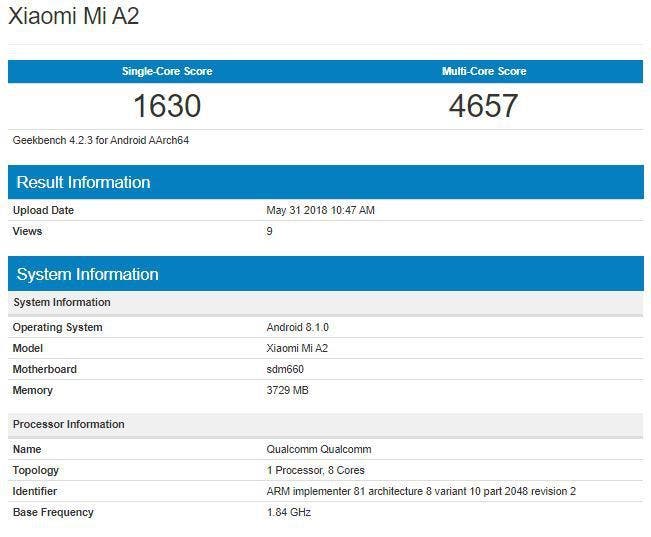 If you’ve forgotten the Mi 6X, it comes with a 6.0-inch IPS display and there’s a 6GB variant as well. So we could see the same happen to the Mi A2. The Mi A2 would represent a valuable upgrade over the Mi A1 in many aspects. The screen would be much bigger and attractive. The front camera would be a major upgrade with a 20MP sensor and AI quirks. The rear camera although not a huge upgrade will still be a performance booster over the previous setup.

We have seen the Mi A2 Lite pass Singapore’s IMDA, and it seems the handset is close to launching in the country. However, there’s still no spotting of the Mi A2 at Taiwan’s certification authoritiy yet.

Previous Craving some high-end projector ? How about the Xiaomi Mi Laser ?