Last week, as scheduled, Huawei held a conference and announced a few new products that made a huge stir in the net. The Honor 9i is already available for purchase at a price tag of 1399 yuan. But we are more interested in the first smartphone featuring Huawei’s new and scary technology dubbed as the GPU Turbo. Of course, it has become a buzzword recently, and many accuse Huawei saying this technology is a marketing gimmick. But we the truth is the first handset with it onboard is the Huawei Honor Play and it is already available for purchase, as planned. So you can test it and make assumptions yourself. 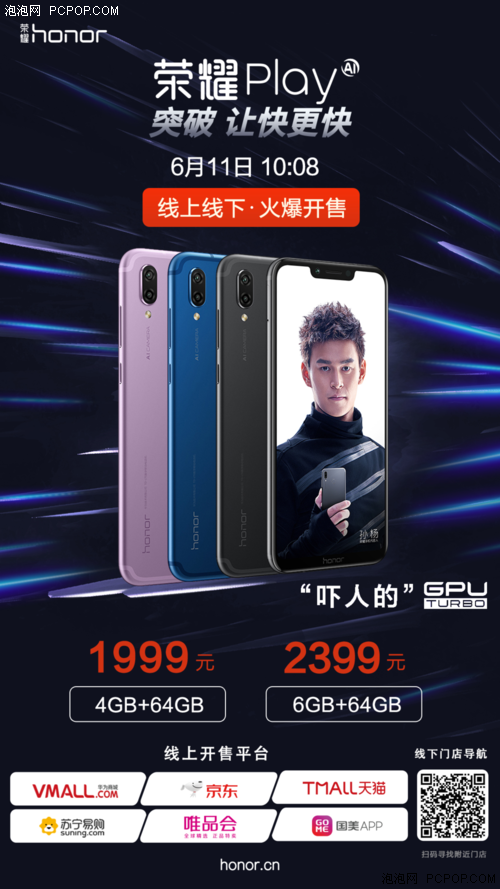 The Huawei Honor Play has been also promoted as a game phone. But we used to see the game smartphones come with a different look and way more powerful hardware. At least, the latest game devices in face of the Xiaomi Black Shark, Nubia Red Magic, and the Asus Rog game smartphone sport features like that. Anyway, the Play can be considered as a relatively budget-friendly handset for gaming purposes, in which software plays the main role.

There have been announced a few color options including Magic Night Black, Aurora Blue, and Nebula Purple. At this moment, only the former two variants are available on multiple e-commerce platforms such as Huawei mall, Jingdong, Tmall, Suning, Gome, Gome, Vipshop, etc. the lower variant is priced at 1999 yuan, while the higher version comes at 2399 yuan.