The Android 8.0 Oreo Beta program has started for the Huawei P9 two months ago, since the introduction of the latest Google’s cookie, Huawei P9 owners are eagerly waiting for the so-called update, but according to someone from the UK support the highly-anticipated update could not come for the old handset.

The weird response came after a UK customer sent an e-mail to Huawei’s UK support team asking when the P9 Oreo update will arrive. The support team replied that due to some hardware limitations are leading to malfunctions, freezes and battery drain that are keeping the OEM from releasing OTA update to the eligible P9 devices. Well, that response is just weird, we all know that the hardware inside Huawei’s P9 is good enough to run Android 8.0 Oreo without any kind of limitation. 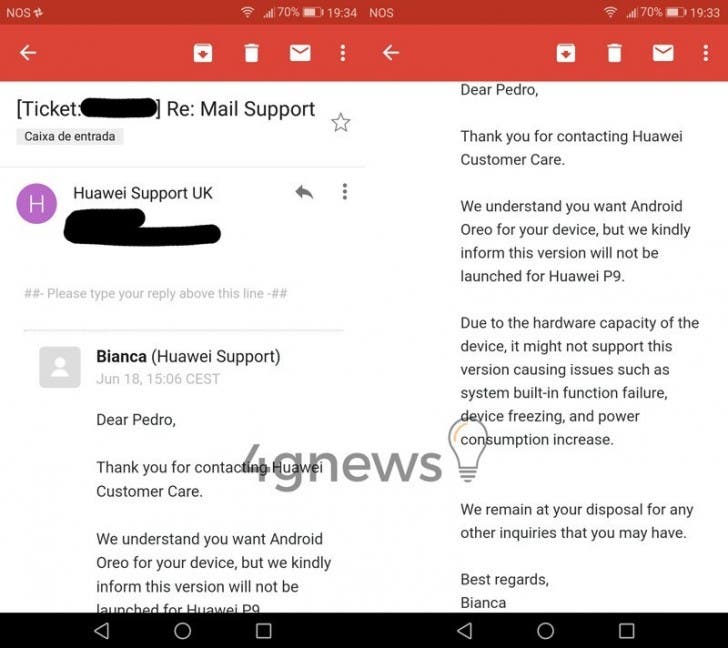 Also, it’s not common to see Huawei development team dropping software updates after a long time of wait and developing process. Would make sense for the company to waste all the time employed in bringing an update for Huawei P9? Well, in the end, the software update team could not be aware of the response that is being given to UK costumers.

Would be a huge disappointment for the owners of this two-year-old flagship that despite the aging still rocks in most situations. If hardware limitations are really keeping this update away from the standard P9, the P9 Plus and P9 Lite could see the same fate. Again, this only comes to reinforce our suspicions that the Huawei’s UK Customer Support isn’t really aware of the facts.