Nubia, in its usual practice, announced the ZTE Nubia Z18 mini earlier in the year without the sibling Nubia Z18. Though there is still not a scheduled official event for the flasghsip Z18, the smartphone has made it to the rumor headlines in the past few months and has today moved closer to been unveiled as it has now appeared on the Geekbench.

While details revealed by the Benchmark site are limited, we do have the model number as NX606J, which tally with the one seen on AnTuTu a while back.  The Benchmark site recorded a single-core score of 2344 and a multi-core score of 8933 for the device, thanks in part to the flagship Qualcomm‘s Snapdragon 845 coupled with 6GB of RAM. It also reveals the device will boot Android 8.1 Oreo out of the box.

Recalling the specs details revealed by TENAA, the ZTE Nubia Z18 is tipped to come with a notched display, a dedicated voice assistant button on the left just like on the Z18 Mini while the power button and volume rocker are on opposite side.

Tipped to be packed with a 3,350mAh battery, the Nubia Z18 should come fitted with a 5.99-inch display offering up to  FHD+ resolution of 2160 x 1080 pixels and will be powered by the SD 845 coupled with up to 8GB of RAM. The optics department, the TENAA listing reveals the Nubia device will come with dual camera setting, comprising of a 24MP primary sensor, and an 8MP secondary, while a similar 8MP sensor is expected to sit somewhere above the display. 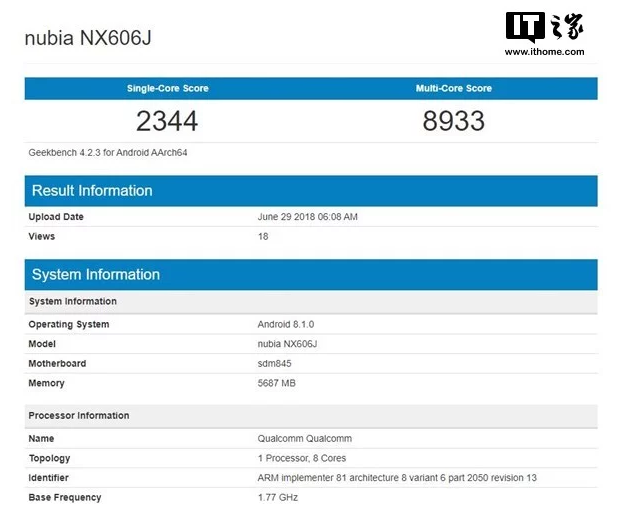 Nubia hasn’t scheduled a launch event for the Nubia Z18 yet, but there are indications it will arrive later this month alongside the Nubia Z18s, which might be a toned down variant of the device.