AnTuTu is not a benchmark only that provides scores for various smartphones. Its database and the top lists released every month may reflect the actual state. So once a new list or chart is released, we quickly take a look at them in order to understand what changed in the market. As for now, this benchmark has released the top Android smartphones list for June based on users satisfaction rate. What’s interesting, 23 smartphones have got a satisfaction rate exceeding 80%. 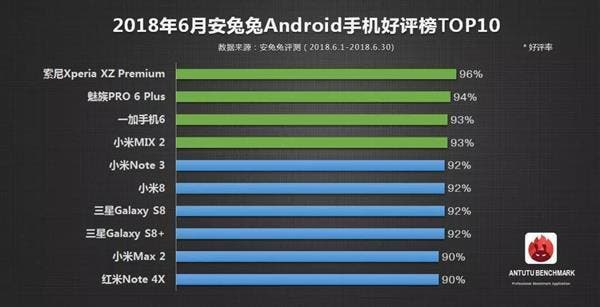 The first place is occupied by the Sony Xperia XZ Premium, with a satisfaction rate of 96%. This is the annual flagship of the Japanese manufacturer launched in 2017. It’s not a cheap phone, with a price tag of 5199 yuan ($784). But this is a genuine flagship with many black technologies and powerful performance. Plus, it sports a 4K HDR screen and supports the world’s first 960-frame slow motion video. That’s why it can be considered as one of the best models launched in 2017. Also, it continues being popular.

You will be surprised but the second place is taken by the Meizu Pro 6 Plus, which also has a satisfaction rate of 94%. It’s one of those smartphones that is packed with the Samsung Exynos 8890 chip. The Meizu Pro 6 and 6s were equipped with MediaTek SoC. Probably, this change affected customers’ attitude toward it. At the same time, the phone’s 4+64GB variant has got a huge price cut of 1499 yuan ($226) during 61. So this should have had an impact as well.

Finally, the OnePlus 6 is on the third place. Its satisfaction rate reaches 93%. It’s senseless to name the pros and cons of the OP6, as it’s known to be one of the best Android smartphones around the globe. Plus, it comes at a reasonable and affordable price tag of 3199 yuan ($482).