Huawei announced that its smartphones shipments have exceeded 100 million units. He Gang, the head of Huawei Technologies’ smartphone unit, also said that’s not a problem to reach their main goal of 200 million units. However, to achieve this goal the company will definitely need new products. Just a couple of days ago, the Huawei Nova 3 and Nova 3i were announced. But they are aiming at young customers. Therefore, they will yield other models in terms of sales. So they need the support of Mate series. Today, on July 20, Roland Quandt took the lead in stealing some information about the Mate 20 Lite. He said, this phone is codenamed Sydney and had at least two models of Sydney M and Sydney I. 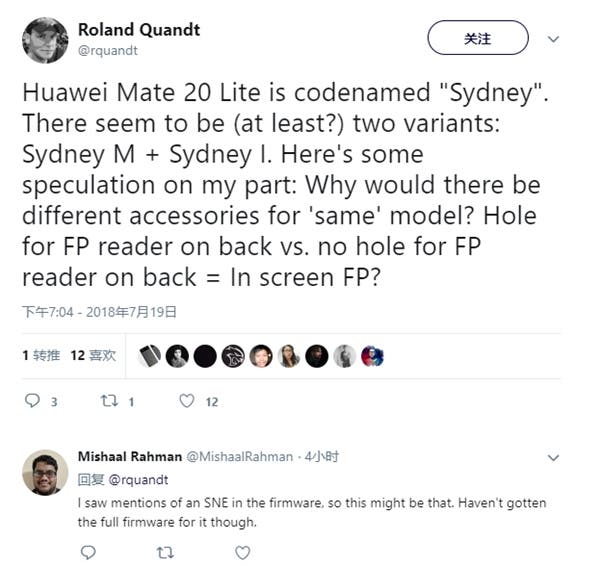 Unfortunately, there is no further information. But the author’s personal guess is that one of them will come with a rear-mounted fingerprint scanner, while the other will come with an on-screen fingerprint identification. This news was confirmed by XDA’s Mishaal, who said the code of Sidney had been noticed in some firmware data.

We should also note this is the Huawei Mate 20 Lite. The suffix of ‘Lite’ simply means it’s the lightened variant of the regular model. However, there is another guess – maybe it’s the international variant of the Mate 20. Obviously, that is conjecture merely. But when looking at the previous models such as the P20 Lite or the Mate 10 Lite, we can see their configuration differs from that in the regular variants. Say, both mentioned models come with a Kirin 659 chip.

If taking this information into consideration, we can predict the Huawei Mate 20 Lite will be packed with a Kirin 710, which was released recently, while the original model of the Huawei Mate 20 will sport a Kirin 980. The latter is expected to release during the German IFA show in September.