We’re probably two months away from knowing the third generation of Google Pixel smartphones, but when it comes to Android P, it is rumored to come on August 20th, according to latest rumors. Despite the imminent release of Android P, the Google Pixel 3 and Pixel 3 XL will probably be the first smartphones running the latest release and leaked info from GeekBench confirms that and more about the bigger XL version. 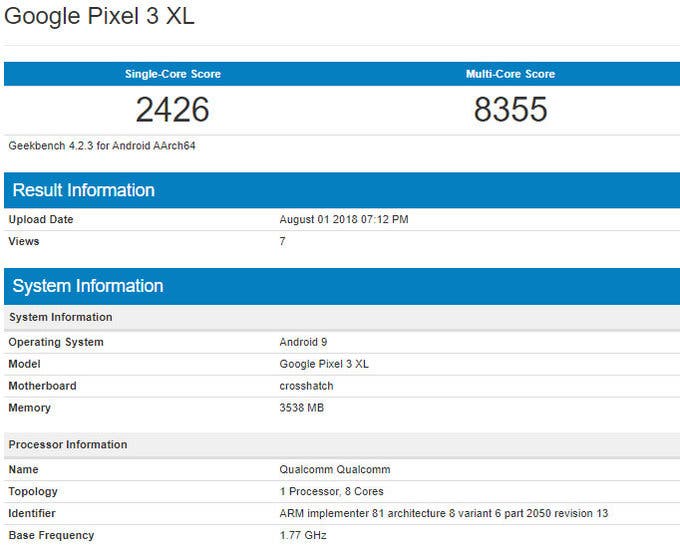 According to the leaked info, the Pixel 3 XL will likely feature the Snapdragon 845 chipset alongside 4GB of RAM. That amount of RAM may sound underwhelming for some technology enthusiasts, especially when Samsung is about to up its game with the Galaxy Note 9 and its 6GB of RAM. Of course, 4GB of RAM is more than enough for a pleasant experience on Android.

The handset was able to achieve a 2426 Score on the single-core testing and 8355 on the multi-core tasks. Of course, those aren’t the best numbers achieved by a smartphone with such specifications, but let’s take in consideration the fact that this benchmark probably was made on a Pixel 3 XL prototype.

We had a glimpse of the Pixel 3 XL and its splendorous “notched” design some days ago, and today details of its specifications were revealed. With the handset release likely to happen on late October or early November, we expect to see a sea of leaks appearing on the upcoming months. So, stay tuned for more.

Next Infinix Smart 2 (X5515) with dual-VoLTE support launched in India, exclusive to Flipkart