Today, the Meizu 16 series was officially sold with a 2698 Yuan ($394) price tag. On Jingdong, the number of pre-orders exceeded 1 million units and the reservations on Meizu’s official website should be more. According to reports, Meizu 16 series reservations surged by 339% year-on-year. These huge reservations caused these smartphones to sell out in one second.

On Meizu’s official pre-order page, this smartphone will be shipped 4-8 weeks after the payment is made but the company says that the delivery time is only for reference purposes and will be updated as its stocking improves. One user is entitled to one unit of the Meizu 16 series and if you are not satisfied with the delivery time, you can apply for a refund at any time and it will be paid within two working days. In addition, Huang Zhang said in the Meizu forum a few days ago that Meizu 16 official website has more than 100,000 fully paid reservations, and its partially paid reservation is about 1.4 million. The Meizu 16 series is the first Qualcomm Snapdragon 845 smartphone to launch for below $400. 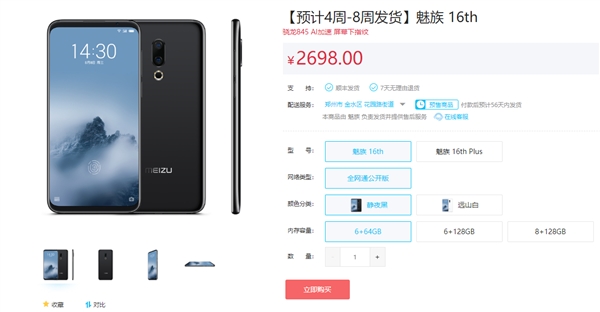 The Meizu 16 has a 6.0-inch AMOLED display and the 16 Plus sports a bigger 6.5-inch panel with a bigger 3640mAh battery powering it. Both handsets feature the Snapdragon 845 SoC, so you’re not short on firepower. The Meizu 16, on the other hand, has a 3,010mAh battery. Both handsets come with mCharge that tops up the phone to 67% in 30 minutes. Both have the same 12MP + 20MP dual rear camera and the 20MP selfie shooter. Meizu focused on the rear camera a lot saying the IMX380 CMOS (12MP) used is the best in the range, even compared to the IMX519 & IMX363. One of the two models also has OIS but Meizu didn’t specify which one has it.

Next Huami Technology Has $15.3mln Net Profit In Q2