Oppo’s sub-division, Realme, is now a stand-alone brand and on August 28th, it’s gearing up for it’s second launch event. Everybody knows that event is all about the Realme 2. But how much does everyone know about the Realme specifications? Not much i presume. Before we walk off to a relaxing weekend, here’s the latest scoop for all the Realme 2 specs. Spoiler ahead: You might not like it. 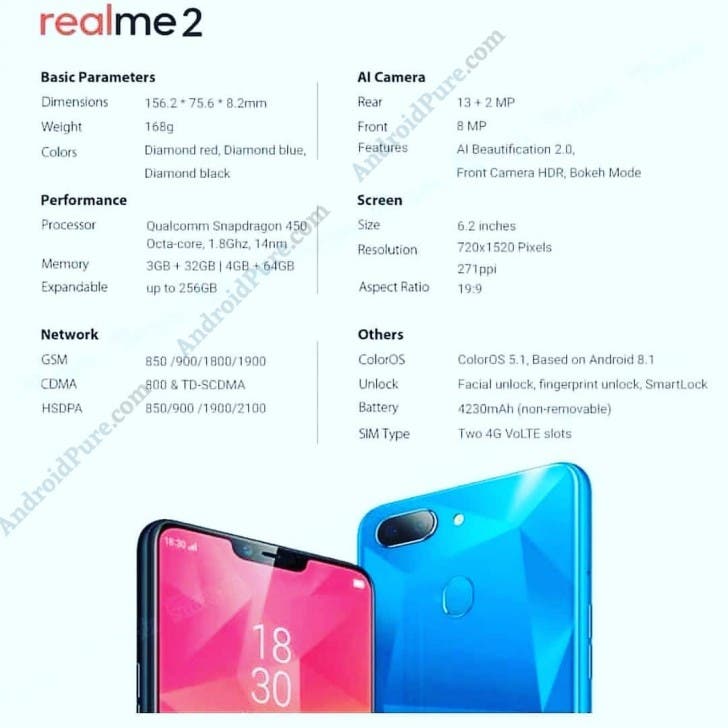 The leak comes from a portal Androidpure.com and we’re torn on the authenticity of the leak mainly because of the info that is provided. And here’s the real shocker. As per the source, the Realme 2 will feature a Snapdragon 450 SoC. The Realme 1 was an awesome performer due to the MediaTek Helio P60 inside. And we do know that Qualcomm’s chipsets are preferred over MediaTek’s but this swap is obviously a step in the wrong direction. Now, let it be known that Realme has announced that it will be offering a Qualcomm CPU in one of it’s teasers, so that much is not hot air. Due to the leaked CPU, many are now saying that the Realme 2 will be nothing else but the rebranded Oppo A5.

And that is why we have legitimate doubts about this leak as Realme would not risk downgrading what is only its second product in a highly competitive segment.
Besides that, the Realme 2 display is also a downgrade with an HD+ resolution (720×1520 pixels) described for a 6.2-inch panel. Moreover, only two RAM and storage variants have been mentioned which again sounds fishy. There’s just a 3GB + 32GB variant and a 4GB + 64GB version. For more info, take a look at the image above. In the end, we suggest not to take this leak too seriously as there’s no way to assure it’s legitimacy. And stay tuned for more info coming in the next few days.

Next Honor working on phone simialr to Honor 7A, launch soon in India