Huawei not only competes with other brands but also with its own sub-brands. Just recently, the Huawei TalkBand B5 business smartband was released. Today, Honor issued a statement saying it will hold a new product launch conference in Xi’an on September 5, where the company will uncover the Honor 8X and the Honor 8X Max. But there will be other products as well. This afternoon, the company officially announced through its Weibo account that there will be the Honor Band 4 and Honor Band 4 Running Edition. The latter will come with a number of wearing styles. As the poster shows, it can be worn not only on the wrist but also on the feet. 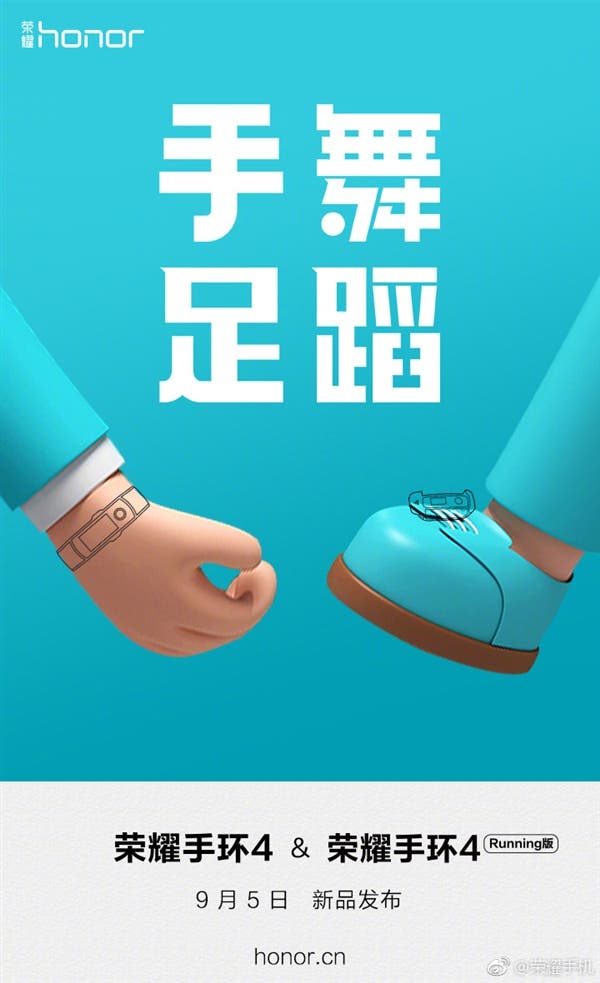 Though there are not many features known at this moment, it’s assumed the Honor Band 4 and its sibling will be capable of providing all those sports and health data the other models do. Plus, they will provide the details of the movement after each run. The data will be clearly displayed through various charts in the mobile app.

Of course, the Honor Band 4 and the Running Version will show the heart rate, sleep monitoring and other useful data. It’s also should have a waterproof ration.

It is worth mentioning that the Honor Band 3 also came with an NFC chip, which supports the subway, bus, and other transportation payments. So there is every reason to think the upcoming Honor Band 4 and the Honor Band 4 Running Version will integrate NFC functions.

However, the Honor Band 4 is not going to compete with the TalkBand B5, which is a business class smartband. Instead, it will struggle against the models such as the Xiaomi Mi Band 3.