Japanese Electronics giant – Sharp is now back to the smartphone markets in Europe, and today at the 2018 IFA revealed a trio of smartphones namely: Sharp Aquos B10, Aquos C10, and Aquos D10, all of which are under the 400 euro price mark, and while these devices won’t turn heads, they are at least good enough to re-awaken Sharp ailing smartphone business in the continent.

Occupying the top echelon is the Sharp Aquos D10, a mid-range smartphone, and one that looks more like a rebadged Sharp Aquos S3 in virtually all forms. And in identifying with the modern trend, the Sharp Aquos D10 flaunts an edge to edge design, with a display notch, a negligible bezel on the chin and a 5.99-inches display 2,160 x 1,080 screen resolution and about 91% screen-to-body ratio. A major selling point of the Sharp Aquos D10 is what sharp calls the freeform technology – a feature that brings to your smartphone the color reproduction found in Sharp’s smart TV. The device gets a 2,900mAh battery, a dual-camera setup (12MP+13MP telephoto), 16MP selfie camera, while it is powered by the SD 636 SoC coupled with 4GB of RAM, and 64GB of expandable storage. The device is priced at 399 euros and should hit the store soon.

Next on the lineup of smartphones presented by Sharp at 2018 IFA is the Sharp Aquos C10 -a watered-down variant of the D10. It could well qualify as a rebadged Aquos S2 with a smaller battery. It flaunts a 5.5-inch full HD+ TFT display with an essential notch type, while it gets the Snapdragon 630, 4GB of RAM, and 64GB of expandable storage under the hood. On the camera front is a dual-camera setup (12MP+8MP), and an 8MP front-facing camera. The battery is a slight reduction over the D10 – a 2700mAh battery, and much like the D10, it boots Android Oreo out of the box. 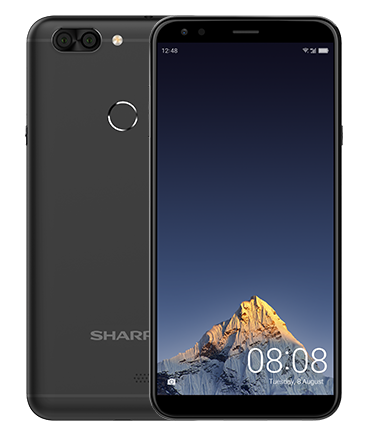 The Sharp Aquos B10 is the lower end model of the trio, featuring a 5.7-inch 720×1440 display and powered by a 1.5 GHz octa-core MediaTek (MTK6750T) processor coupled with3GB of RAM, and  32GB of storage, while the major highlight appears to be its big battery capacity – a 4000mAh battery. There is a dual camera set up at the back – a 13MP+5MP on the back cameras, a single 13MP sensor with face unlock on the front, and boots Android Nougat out of the box. The asking price is a €299.