On September 3rd, a Xiaomi official revealed that the company is getting ready to release a flagship smartphone for 1999 Yuan ($293). The next day, an exclusive report from mysmartprice shows that Xiaomi is getting set to unveil more smartphones in the Mi 8 series which as we know is a flagship series. One of the upcoming Mi 8 series smartphones is the Xiaomi Mi 8 Youth Edition which is believed to a “budget” flagship smartphone. This smartphone will be available in 4GB+64GB, 6GB+64GB, and 6GB+128GB configurations as well in gray, gold and blue colour options. Connecting the dots, it is quite obvious that the Xiaomi Mi 8 Youth Edition is associated with the earlier revealed 1999 Yuan ($293) price tag for a flagship smartphone. 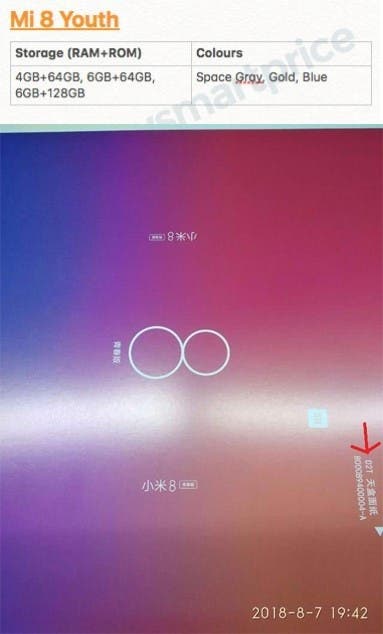 Previously, the a new Xiaomi device with model no M1808D2TE/T/C obtained radio transmission approval and 3C certification. This machine may be the upcoming Xiaomi Mi 8 Youth Edition, which is produced by Fuzhikang Precision Electronics (Langfang) Co., Ltd.