The 1999 yuan ($292) was the ‘price mark’ of Xiaomi. In the past two years, with the rising cost of components, Xiaomi’s flagships have had to exceed this price. However, the latest news shows that Xiaomi will release a new high-end smartphone in September, and the price will return to 1999 yuan. 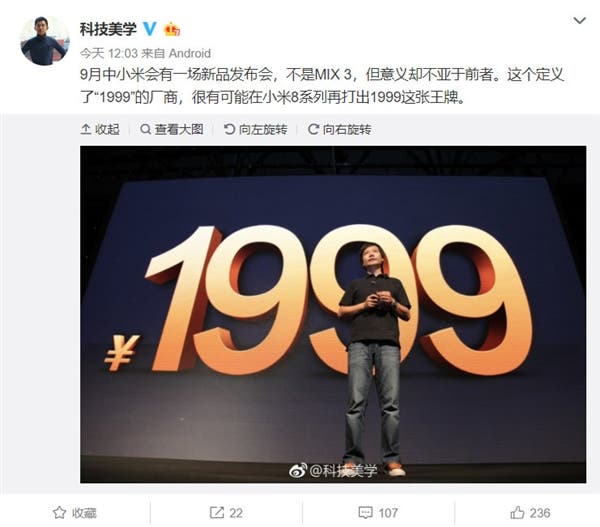 Today, we learned the Xiaomi Mi MIX 3 will hit the market as soon as in October. Lei Jun has confirmed that the new flagship released in October will accelerate mass production and strive for large-scale sales at the end of October. At the same time, Xiaomi will hold a new product launch conference in mid-September. So there is every reason to think the upcoming Mi series smartphone will be the one to bring back this price mark.

But there are too many Mi fans thinking the Xiaomi Mi MIX 3 can’t be priced so because of the costly components it uses. This refers not only the alleged Snapdragon 845 chip but also a genuine full-screen design and a special lifting structure like the OPPO Find X. Thus, to return to the mentioned price mark the manufacturer should come in with another top-end model. The same group of users thinks it will belong to the Mi 8 family. As for the current models, the Xiaomi Mi 8 SE is priced at 1799 yuan ($263), while the regular model costs 2699 yuan ($395). The difference is 900 yuan. So another Mi 8-line smartphone can be easily placed in the middle.

As you remember, Xiaomi has been pricing its flagships at 1999 yuan, but they actually cost around 3000-4000 yuan ($439-586). This was one of those factors that made Xiaomi popular. So after two years, the manufacturer can return to the strategy that made it successful.