Today, on September 6, Huawei officially announced that it will hold a new product launch conference in Guangzhou on September 12 (next Wednesday) in order to officially release the new Maimang 7.

According to the officially released picture, the Huawei Maimang 7 uses a notch screen design, while the back adopts a 3D curved glass, and the dual-camera and fingerprint identification layout looks like the Huawei Mate 10 Porsche Design. 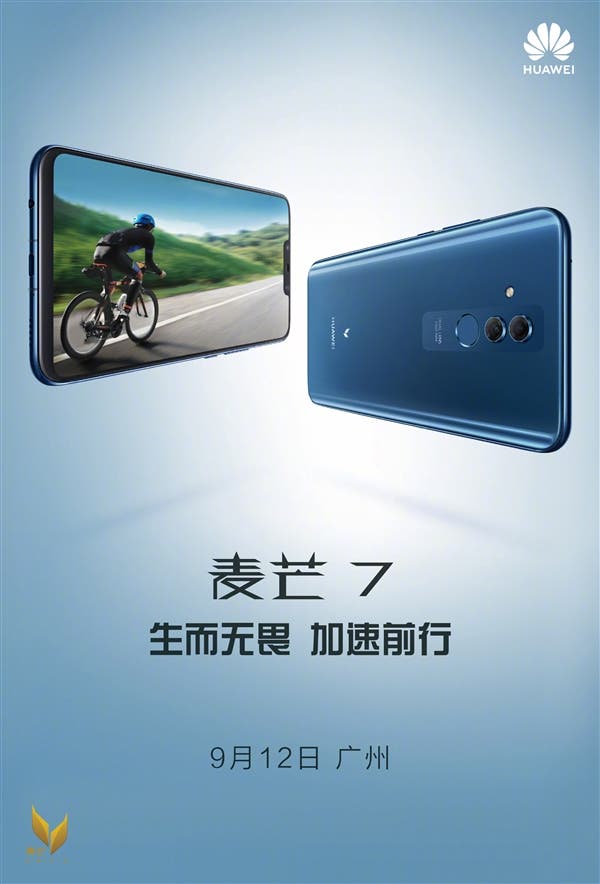 According to the data given by the Ministry of Industry and Information Technology, the Huawei Maimang 7 sports a screen size of 6.3 inches, a resolution of 2340×1080, and a screen aspect ratio of 19.5:9.

In terms of core configuration, the Huawei Maimang 7 will be packed with an octa-core processor, CPU clock speed of 2.2GHz (assumed to be the Kirin 710), 6GB of memory, 64GB of native storage, front 24 MP + 2MP dual-camera, rear 20MP + 2MP camera, and the battery capacity is 3650mAh.

Of course, the Huawei Maimang 7 will be equipped with GPU Turbo technology. As you know, GPU Turbo achieves a great improvement in graphics processing efficiency and reduces power consumption through the optimization of software and hardware. Yu Chengdong stated that GPU Turbo broke through the processing bottleneck between the EMUI operating system, the GPU, and the CPU thereby achieving a great improvement in the graphics processing efficiency of the entire system.

According to the officially measured data, GPU Turbo can improve graphics processing efficiency by up to 60% and SoC power consumption by 30%. After Honor Play launch, several popular games were tested successfully and GPU Turbo a good job.

By the way, this has been quite expected because the previous generation of the Maimang 6 was launched on September 22 last year.