Following its appearance on China’s TENAA just recently, a Xiaomi made device purported to be the as-yet-unannounced Xiaomi Mi 8 Youth edition has now been approved in Taiwan, by the country’s NCC, an indication that the device when launched will be offered for sale in the country. 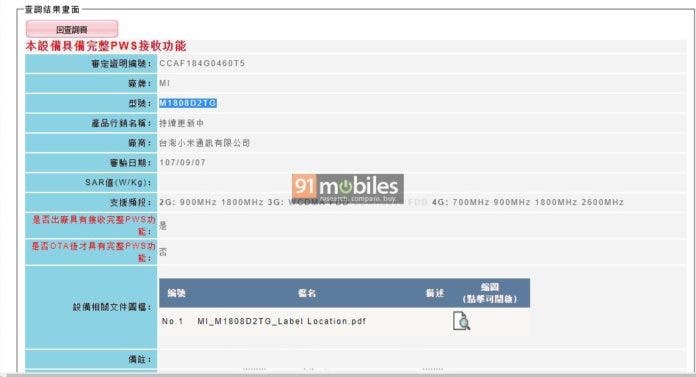 The listing sadly mentions no specs details, however, we already know the purported Mi 8 Youth will be a less powerful Snapdragon 710 SoC, an indication too, that it will come with a lower price tag.

A leak from Weibo, as well as details gleaned from China’s TENAA, suggests the Xiaomi Mi 8 youth edition will come fitted with a 6.26-inch notched display with 2280 x 1080 pixels resolution and an aspect ratio of 19:9 ratio. Under the hood, the device will house a Snapdragon 710 processor coupled with 6GB of RAM and 64GB internal storage, while it will come fitted with a dual rear 12MP primary snapper with an unspecified secondary shooter, and a 24MP camera for selfies above the display.

We have no clue when the device will arrive, but having secured TENAA’s and NCC’s approval, the device could be unveiled at some point in the near future.

Previous Apple : Taxation on China will force products to rise in price

Next How Blockchain Will Affect the Smartphone Industry