Previously, Xiaomi’s flagship phones were priced at 1999 yuan ($290). This was the most attractive selling point of the smartphones coming our way from the Chinese Apple. Of course, its handsets were coming with a decent specs list and were able to provide an amazing performance, Xiaomi could gain popularity due to its cost-effective models. The company continues this strategy now. But because of the rising cost of components, Xiaomi’s flagships have had to be priced higher. At the beginning of September, Xiaomi officially announced it will release a new flagship phone at the traditional price tag of 1999 yuan. Later it became known the Xiaomi Mi 8 Youth Edition is on the way. We know it will be officially uncovered on September 19 in Chengdu. It has already opened an appointment on all major platforms. Today, it became known when this handset will hit the market. 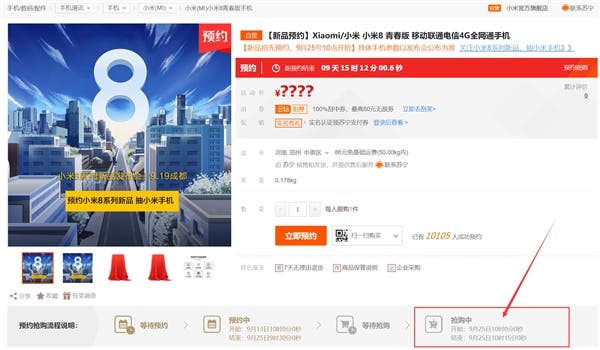 Today, Suning Tesco’s appointment page of the Xiaomi Mi 8 Youth Edition shows the phone will be available for purchase starting September 25. But it doesn’t provide any information concerning the pricing. However, there is no reason to think it will be priced over 1999 yuan.

Actually, the Xiaomi Mi 8 Youth Edition is the modified version of the Xiaomi Mi 8 SE. It uses a double-sided glass material. And the biggest change is the dual-camera’s layout on the back. Now it adopts a horizontal design. The fingerprint recognition module is still there. Moreover, we have already heard it will come with a few color options of Twilight Gold, Dream Blue, Deep Space Gray, etc.

The Xiaomi Mi 8 Youth Edition has already passed TENAA certification, and we know what a specs list it will come with. According to the previous leaks and rumors, it will sport a 6.26-inch screen with a resolution of 2280×1080, a Qualcomm Snapdragon 710 pseudo-flagship chip, max 8GB of RAM and 128GB of native storage, a 24MP front shooter, a 3250mAh capacity battery, and run on Android 8.1.

Next Tim Cook talks about iPhone pricing, the Chinese market and more