Samsung’s next Android flip phone is nearing release, with the successor to last year’s W2018 (pictured above) now being confirmed to be called the Samsung W2019, according to a Wi-Fi certificate issued by the Wi-Fi Alliance, the device will be identified by the model number SM-W2019 and will run Android 8.1 Oreo out of the box.

The handset will be powered by Qualcomm’s Snapdragon 845 chip which uses the Snapdragon X20 modem. 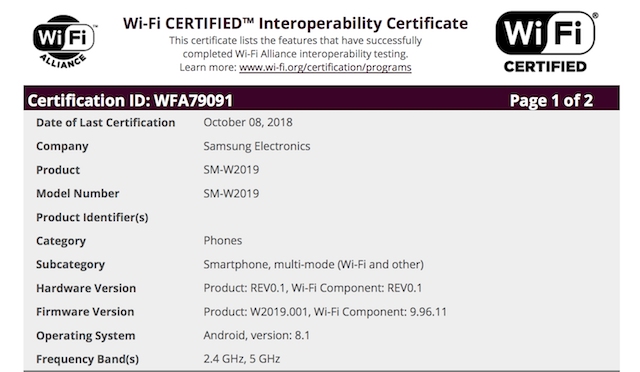 Samsung has started testing Android-based firmware intended for the W2019 in early September but the existence of the newly spotted certificate confirms the handset is close to being released. The South Korean tech giant traditionally launches new additions to its flip phone line in December and that’s likely to be the case this year as well.

No further information about the SM-W2019 has been revealed by this listing, but the W2019 flip phone will be exclusive to China like all of its predecessors. There isn’t really that big of a market elsewhere for this form factor. Samsung can’t be expected to offer the W2019 in any market other than China. The launch itself remains a mystery for now as Samsung hasn’t dropped any hints about it so far.

Next Affordable Lenovo K320t and a smart vacuum cleaner on sale