On October 25th, Xiaomi will release its new smartphone, Xiaomi Mi MIX 3, in Beijing. Through the series of leaks, rumors, and official confirmations, we have a good idea of what to expect in three days time. However, more confirmations are still pouring in. Today, Xiaomi officially confirmed that the Mi MIX 3 will support 960 fps slow-motion videos. This will be Xiaomi’s first flagship to use this feature. 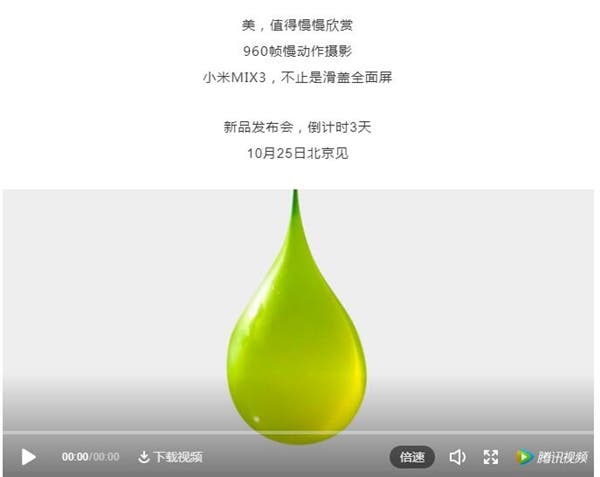 From the speculations so far, the Xiaomi Mi MIX 3 may come with a Qualcomm Snapdragon 845 processor. A 10GB RAM variant of this smartphone is also in the works. This will be the first-ever Xiaomi smartphone with 10GB RAM and it may just be the world’s first ever 10GB RAM phone to hit the market (OPPO FIND X 10GB version is currently not listed). A recent screenshot of the Xiaomi Mi MIX 3 multitasking page shows that the Mi MIX 3 display has a resolution of 2340 × 1080 while its aspect ratio is 19.5: 9. This makes it the first Xiaomi OLED screen with a 19.5: 9 aspect ratio. Compared with its predecessor, Xiaomi Mi MIX 2S, the Mi MIX 3 is thinner and the screen resolution is better (Xiaomi Mi MIX 2S uses 2160×1080 and the screen aspect ratio is 18:9).

Next Oppo announces the Oppo R15x with in-display fingerprint sensor