Made famous by Razer’s 2017 flagship phone,  gaming phones have since moved from a strange niche to a commonplace device in the last few months. Xiaomi, with its Black Shark subsidiary, jumped on the gaming phones bandwagon earlier this year when it launched the Xiaomi Black Shark phone, and now, the firm is back with a sequel to the Black shark 1 – the aptly named Black Shark Helo, a device that might be making it to international market, unlike the original Black Shark that was limited to the Chinse market.

Xiaomi tried to preserve the original Black Shark design, but not without some subtle differences. First, the Black Shark Helo is still a notchless device, with a 6-inch 2,160 x 1,080 display, but has ditched the LCD panel for an OLED, so you should expect to see deep blacks and power savings when viewing dark content. The Black Shark Helo has also made a switch from the home button enabled fingerprint scanner to a rear fingerprint scanner, as well as a switch from a single gamepad to two gamepad attachments for either side of the device. 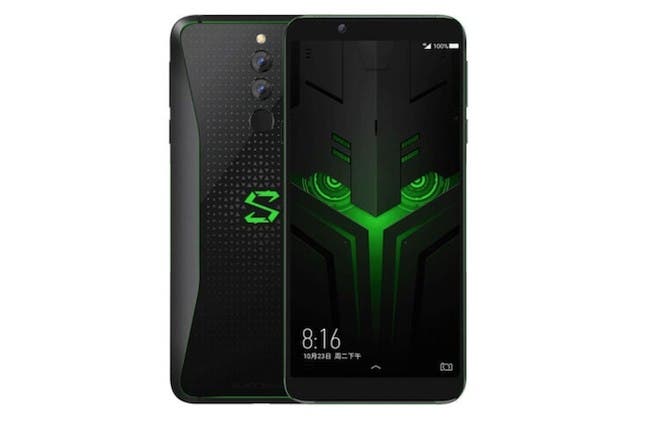 Although the device lacks the Razer’sand ASUS  90 Hz or 120 Hz display, it does feature a similar glowing RGB logo on the back with AI game lighting that changes depending on the game. Very much like the Poco F1, from Xiaomi, the Black Shark Helo comes with a dual-pipe vapour cooling system to keep the temperature from getting out of hands during intense gaming sessions. It lacks the headphone jack, features a stereo front-facing speakers, performance hardware key, as well as a customizable LED light strip on the side.

Away from the designs, most of the improvements are found with the internals. The device gets the flagship SD 845 SoC coupled with 6GB + 128GB and 10GB RAM+256GB storage options. It runs on Android 8.1 Oreo, retains the 4000mAh battery with quick charge 3, while there is a vertically aligned (16MP + 20MP) camera on the back of the phone.

The Xiaomi Black Shark Helo is immediately available to buy in China, with no words on availability and price outside of China.

Next Chuwi's Aliexpress 11.11 promotion can help you save up to 33%