In about an hour, the 11.11 sales will commence in China. Yesterday, Xaomi has announced that most of the Xiaomi Mi 8 series will take a price cut. Infact, this price cut is widespread for tomorrow’s sales and even third-party stores will give price cuts too. Specifically, the Xiaomi Mi 8 Proof the 6GB+128GB version will be reduced by 450 yuan ($65), to sell for 2749 yuan ($395). 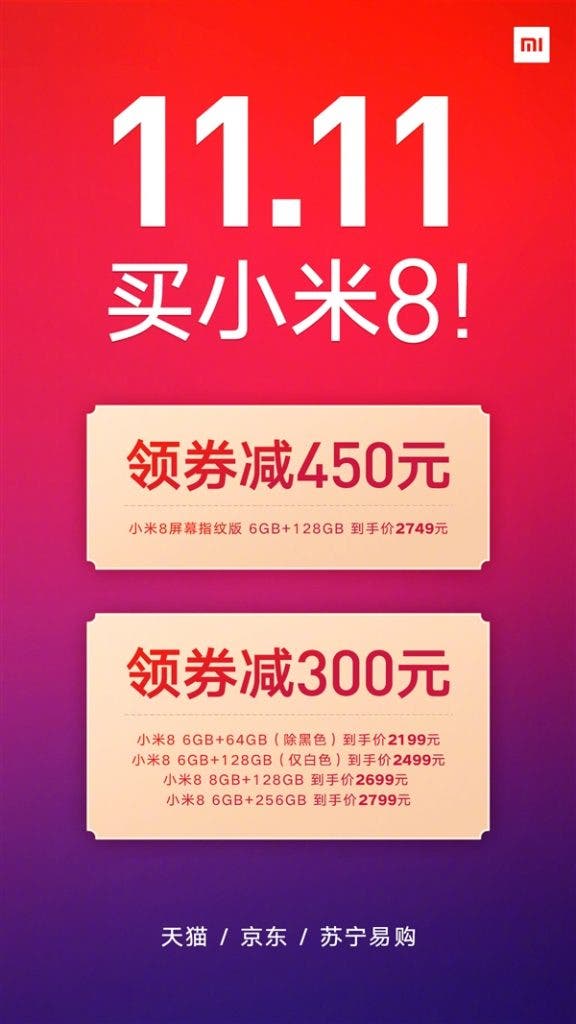 Xiaomi Mi 8 has two core selling points: one is the camera, and the other is the dual-frequency GPS positioning. This smartphone is equipped with a notched 6.21-inch Samsung AMOLED display. It is powered by a Qualcomm Snapdragon 845 processor while its battery capacity is 3400 mAh. In the camera department, it uses the same dual-camera module as Xiaomi MIX 2S. It adopts a 12MP wide-angle + 12MP telephoto sensors on the rear. The main lens is the Sony IMX363, which supports Dual DP dual-core focusing and four-axis optical anti-shake. On DxOMark, this smartphone rear camera scored 105 points which is 4 points higher than iPhone X’s 101 points. However, we have a 20MP selfie shooter.

On Gearbest, we found a very interesting deal where the 6GB+64GB version of Xiaomi Mi 8 will sell for $319.99 ONLY. This is the lowest price ever and its an absolute steal. This coupon has limited units (300) thus you better hurry. The coupon will be active at 16:00GMT or 00:00 Chinese time today. Use the Coupon Code: GBMP1111