Huawei’s Nova series is aiming at young customers. Thus, all models coming our way from this line sport a stylish look, a powerful camera, a good hardware, and cost quite affordable. It was so for the first-gen model. It continued on the second-gen Nova 2 and the third-gen Nova 3, and it’s going to be so for the upcoming Huawei Nova 4. Today, a new promo poster was released through Weibo and it’s assumed to be the Nova 4. The launch date is set to be in December. This handset is going to use a ‘pole full screen.’ 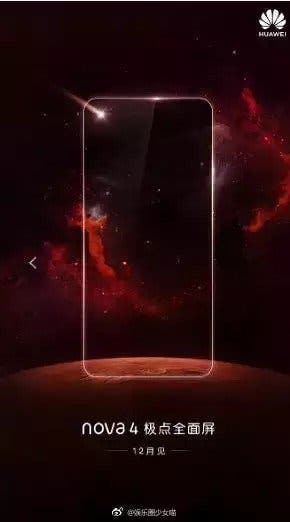 In the poster, we can also see the contour map of the machine. There is a bright spot at the top of the screen. But is it a hole in the screen? If so, the Huawei Nova 4 may come with an in-screen camera like the Samsung Galaxy S10. There is a possibility that the poster showcases the back of the device, but the current version comes with a dual-camera, and most likely the manufacturer want to roll back.

As a reminder, the Nova 2S was released in December last year. On July 18 this year, Huawei officially released the Huawei Nova 3 in Shenzhen. It is equipped with the Kirin 970 processor. According to the frequency of the semi-annual update, in December of this year, Huawei will release the Huawei Nova 4 phone, and it is likely to be equipped with the Kirin 980 processor.

Compared to their own P-series and Mate series, the Nova is relatively ‘younger’, focusing on the young and female markets. However, it should be noted that it is not clear the formality of the poster. According to the naming idea, the next generation Nova smartphone is more likely to be called the ‘Nova 3s’ and may continue to use the Kirin 970 processor (after all, the Kirin 970 has been used only on one Nova generation).