Even though it’s barely been only a few months old, Huawei has thought it wise to keep the Nova 4 alive by offering it in a much more affordable option. The Nova 4 is one of the first in a wave of phones with a hole punch in the display in an effort to slim down the bezels around smartphones display. Apart from the circular hole, the device checks virtually all the boxes for a top end mid-range phone.

Initially launched available in 8GB RAM + 128GB storage option, the Huawei Nova beginning from today is now available in a more affordable option – featuring 6GB RAM, but still with 128GB of storage and is available in Fritillaria White, Honey Red, Bright Black, and Blue color hues. It is at the moment exclusive to China where it is priced at CNY 2,799 ($417). 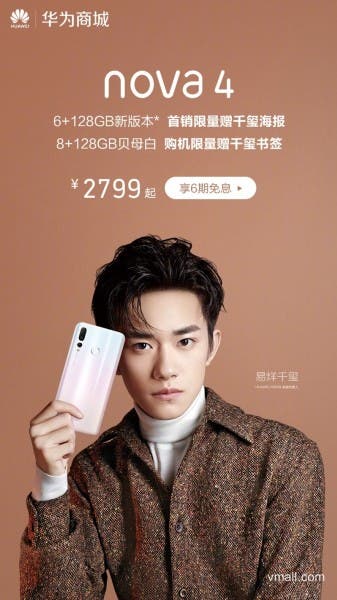 In similar news, Huawei earlier today unveiled the much-rumored Nova 4e -the watered-down variant of the Huawei Nova 4 and as well the Chinese variant of the Huawei P30 Lite due to be unveiled in Paris, France on March 26. It gets same triple rear cameras, but with a waterdrop notch, while the Kirin 970 SoC has also been replaced with the Kirin 710. More details about the Nova 4e here, while more details about the Huawei P30 and P30 pro are still trickling in here.