There are only about two weeks until we finally get to officially see the Huawei P30/P30 Pro as well as the P30 Lite, and as usual in the lead up to the launch date, we have been witnessing the influx of rumors and leaks about the upcoming devices. Although we already had some leaks about the device that was quite revealing, a freshly leaked render courtesy of Roland Quandt however, reveals more details while also showing off the device in a new enchanting color hue.

These new match closely with previous rumors, however, there are a few pleasant addition or removal a pointed out by Roland Quandt of Winfuture. First off,  Roland notes that there will be a fourth color hue for both models – the stunning Sunrise Red, even though not all color might make it to all regions/market. Huawei could also limit certain finishes to specific carriers or retailers, or choose to associate them with a particular storage variant, whatever be the case, the color looks stunning and could very much tickle your fancy.

Color option aside, the latest leaks reveal that the top of vanilla P30 will come fitted with a USB Type-C port flanked by a bottom-firing speaker one side and a microphone as well as the 3.5mm headphone jack on the other side, while the tops get only a tiny antenna line and an extra mic.

Things aren’t too different for the top of the range P30 Pro which gets the same tiny antenna line, an extra mic while also adding an IR blaster at the top. And while the non-pro variant gets a 3.5mm headphone jack at the bottom, the same has been expunged from the P30 Pro for a SIM and nanoSD card tray, though the USB Type-C port and a microphone remain visible. 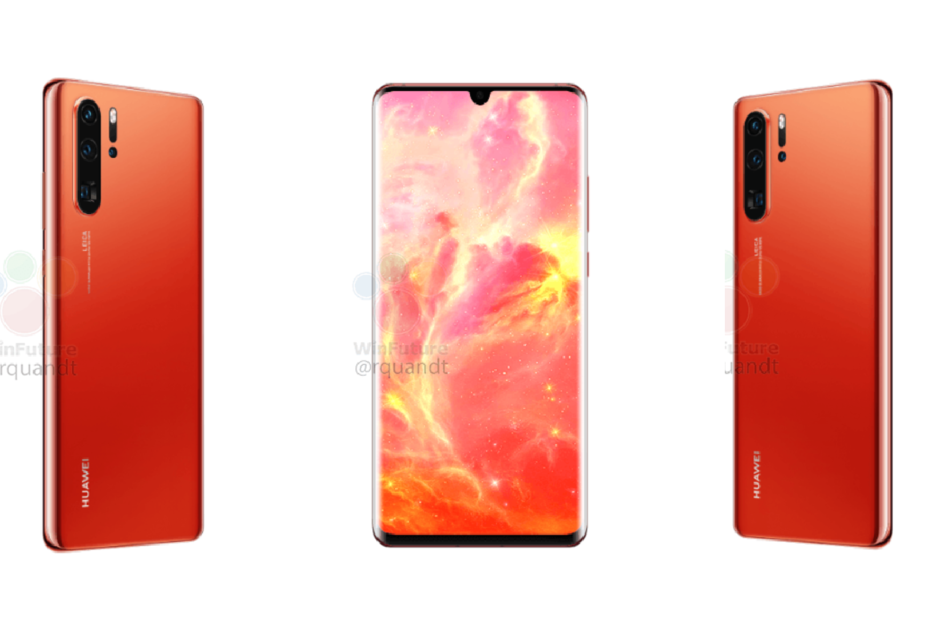 There isn’t more to note, but Huawei’s upcoming device to pack the Kirin 980 couple with 128GB of storage and 6GB of RAM, while the pro variant should take it up a notch further with same SoC, 8GB RAM, 128GB base model as well as 256GB and 512GB optional models.

Photography has always been the focus of the P series lineup, and this year’s model is towing the same path. According to previous renders released by the well-known leaker Roland Quandt, the Huawei P30 will have rear three cameras, meanwhile the P30 Pro will have four cameras; the extra one been a TOF lens. Huawei itself also recently hinted that the series will  get a pretty sweet night mode which should bring up details and colors usually lost in the dark

Next Huawei nova 4e with a 32MP selfie camera released