The Nokia 9 PureView has been released in the US market and shipped to buyers in a few European countries. As the world’s first smartphone with a rear-mounted five-camera, the Nokia 9 has gained a good reputation, but this doesn’t mean it has no shortcomings. If you are not aware, there were some users complaining of its camera app as well as the screen fingerprint identification. 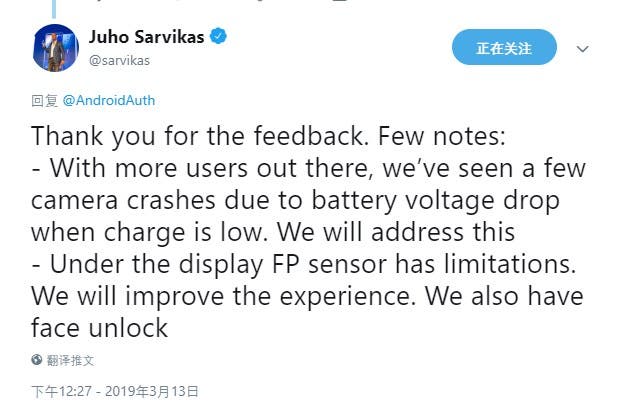 Previously, Android Authority found that there are some problems related to the camera application of this phone, including slow opening, occasional crash, etc. Plus, the screen fingerprint recognition is not particularly accurate. In response, HMD Global’s CPO Juho Sarvikas said on Twitter:

Thank you for the feedback. A few notes:

– With more users out there, we’ve seen a few camera crashes due to the battery voltage drop when charge is low. We will address this.

-Under the display FP sensor has limitations. We will improve the experience. We also have face unlock.

As for the key features, the Nokia 9 PureView is equipped with a rear-mounted penta-camera controlled by a dedicated ASIC chip that provides secondary focus and ultra-high dynamic range. The camera’s five sensors work together to capture light and collect depth data to create an amazing photo.

Of course, the camera is the main selling point of this device. But there are other noteworthy features as well. Say, the Nokia 9 PureView is powered by a Qualcomm Snapdragon 845 processor, which is paired with a 6GB of RAM and a 128GB of ROM. The machine uses a 5.9-inch 2K screen without bangs and supports HDR10. A 3320mAh battery with wireless charging support finishes the package.

Next Huawei Nova 4 with 6GB RAM now available in China