The LG Q9 has been hitting the rumor mills of late. The device is tipped to launch in select markets as a rebaged LG G7 Fit, and was even recently spotted on Google’s Android Enterprise and Google Play Console websites with specs similar to that of the LG G7 fit.

Giviing more weight to already leaked info, the LG Q9 bearing the model number LM-Q925K has now been spotted on the NRRA Korean certification site aswell as on the Bluetooth SIG’s website , which probably indicated the smartphone will be initially heading to Korea. 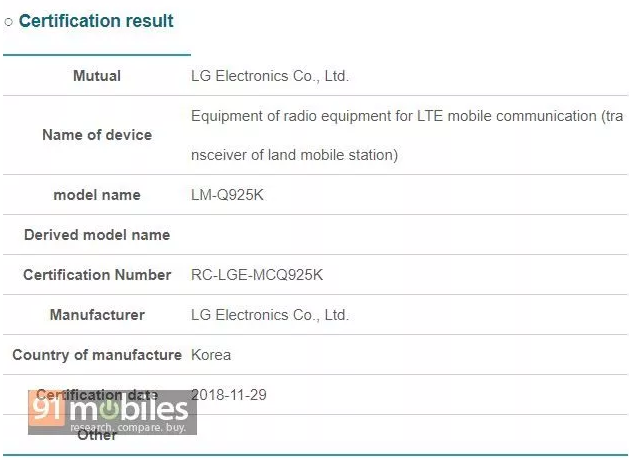 The NRRA certification site doesn’t reveal anything substantial about the phone, apart from the model number, however, we do know that the device will use a Qualcomm Snapdragon 660 processor, an eight-core component with Kryo 260 architecture and Adreno 512 GPU. RAM is expected to be 4GB with two storage options: 32 or 64 GB, which can be expanded by using microSD cards alongside with 3550mAh battery capacity.

We have not received any hint on the possible release date, however, having secured most of the pre-release certifications, we expect the launch sooner than later.