In recent times, Lenovo has made it a mandate to diss Xiaomi with its upcoming Lenovo Z5s and its most recent poster comes with the phrase “Quadra Kill MIUI”. This is in addition to the “Triple Kill Xiaomi Mi 8” which its previous poster reads. Yesterday, Lenovo sent a public Weibo message to Xiaomi’s chairman, Lei Jun, which roughly reads “More offended, happy birthday.” This appeared like an in-direct apology message sent to Lei Jun on his birthday. However, it took Lenovo less than 24 hours to diss Xiaomi again. Today, Lenovo Group Vice President, Chang Cheng, released the Lenovo Z5s new poster which states that the smartphone will be officially unveiled at the Lenovo World Headquarters in Beijing tomorrow. 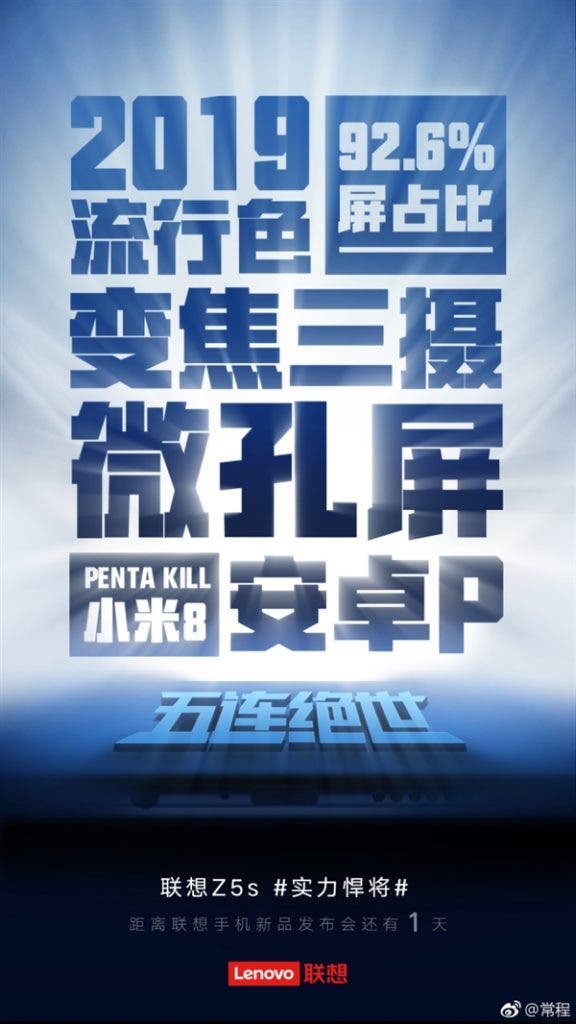 The poster shows that the Lenovo Z5s has five major selling points and these include a 2019 popular colour option (gradient design), a triple rear camera setup, a punch hole camera design, 92.6% screen ratio, and Android 9 Pie system. The poster also comes with the phrase “Penta Kill Xiaomi Mi 8” which hints that the Lenovo Z5s will be better than the Xiaomi Mi 8. Could this really happen? We have about 24 hours to find out.

The Lenovo Z5s will have a 6.3-inch panel with Full HD+ resolution and its light will be kept on by a 3210 mAh battery with support for 18W fast charging. It uses a triple rear camera setup, an LED flash, and a rear fingerprint sensor. As of now, there is no information on the price of this smartphone.