Having recently launched the Moto P series, the Lenovo owned Motorola is now reportedly working on updating its mid-range Moto G series, due to arrive later in 2019. Tentatively dubbed the Moto G7, we now have a fresh set of alleged renders of the Moto G7, G7 Plus, G7 Power, and G7 Play revealing various colour options as well as key design aspects of the upcoming devices.

The company back in August officially joined the notch trend with the announcement of the Moto P30 in China. Now, the recent renders suggest the company might be retaining the notch for the upcoming Moto G7 lineup. The notch, when implemented for the G7, implies the lineup will sport an even better screen-to-body ratio as opposed to the predecessor.

Based on the freshly leaked renders, Motorola is likely to implement two styles of notches for the series – a wide and a waterdrop type. The Moto G7 and G7 Plus will have a tear-drop notch while the G7 Play is tipped to come with a full-sized notch with a single selfie camera and front-facing flash. 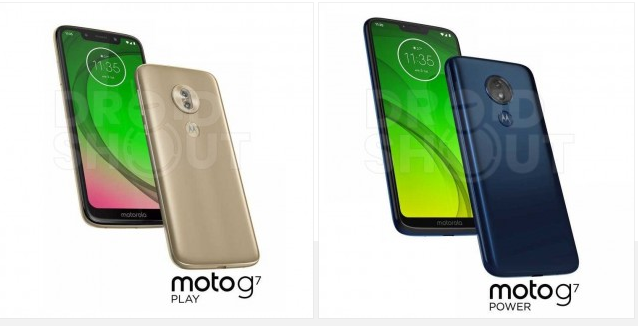 Still based on the renders, all Moto G7 variants is tipped to come with the usual Moto batwing logo with fingerprint sensors embedded into them, while the Moto G7, G7 plus and the Moto G7 Play, G7 power will come with a dual and single rear camera respectively.

As of now, we have no words on when the alleged Moto G7 will launch, our guess, however, is sometime in the first quarter of 2019.

Previous Samsung Galaxy S10 will probably have its own night mode

Next Galaxy A8s with Infinity-O display goes up for Pre-Order, Price revealed