Yesterday, as scheduled, Xiaomi released a new category smartphone, namely the Xiaomi Play. The latter is positioning at the ‘high-quality entry-level’ segment. At the launch, there was only one version coming with a 4GB of RAM and a 64GB of native storage. But today, when this amazing handset went on sale, there were two other options packed with a 6GB of memory as well as two optional storages of 64GB and 128GB. The original variant is priced at 109 yuan ($159), while the mentioned two models are available at 1299 yuan ($188) and 1599 yuan ($231).

The Xiaomi Play is the company’s first smartphone adopting a drop screen design. It sports a 5.85-inch display, which has similar dimensions to the traditional 5.15-inch 16:9 screen smartphone. The screen also has a contrast ratio of 1500:1 and a pixel density of 443ppi. There are three modes of sunscreen, luminous screen, and eye protection. On the back, the handset uses the industry’s first dip dyeing process to create a Dream blue and Twilight gold gradient effect. By the way, there is also a black variant.

In terms of configuration, the Xiaomi Play is packed with a new MediaTek Helio P35 octa-core chip, which uses a 12nm manufacturing process, and scores over 86,000 in AnTuTu. This result exceeds the Qualcomm Snapdragon 625’s points. Previously, it was rumored this handset will be packed with either the Helio P70 or P90. But as the Xiaomi Play is a low-end device, it’s more logical to put a cheaper SoC inside. 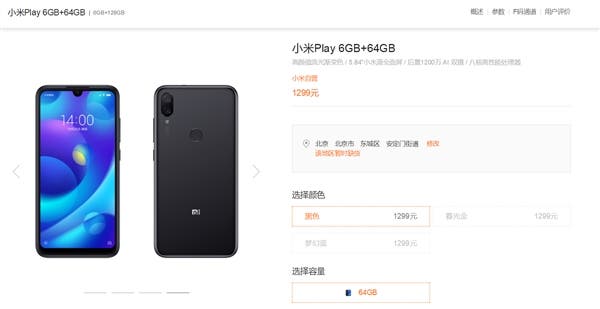 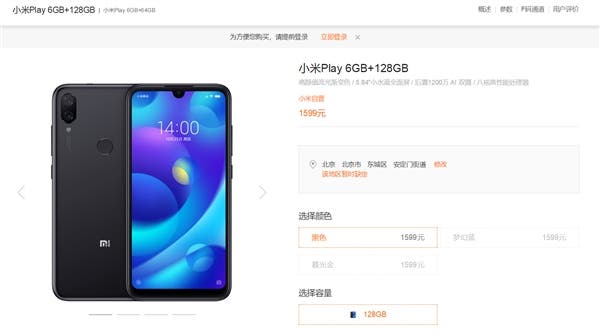