Tomorrow, Honor will launch its own version of the recently-released Huawei Nova 4. As you know, it will be called the Honor Nova 4. Like other Nova-series models, this one is going to aim at young customers. This simply means it should come with a stylish look, strong shooting capabilities, smooth performance, and low price tag. Well, during these days, we managed to learn about almost all the features it will come with. Among them, we could find a Kirin 980 chip, which is considered to be the world’s first 7nm process and is the world’s first SoC in 6 aspects. Previously, this handset appeared in various benchmarks. Those leaks not only confirmed the presence of the Kirin 980 but also revealed some data about the performance. But this morning, AnTuTu said that it has more performance data of the Honor V20 (PCT-AL10) in the back-end database. According to the official information, the score reaches 307,227. Thus, its performance is basically the same as the Mate 20 series. 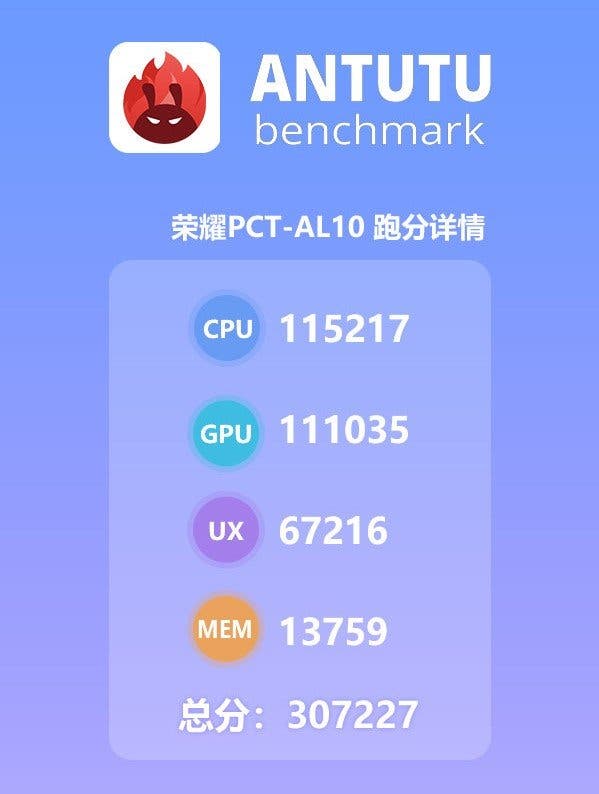 Previously, when the Honor V20 spotted in GeekBench, it showed 3261 and 9792 points in the single-core and multi-core tests, respectively. As for AnTuTu, it scored 274,343 points. Thus, the difference between this and the previous data is about 33,000. AnTuTu believes that the significant increase in the new running points is due to the performance mode because the configuration remains the same. As you can see, the Honor V20 is said to come with a 2310×1080 resolution display, Kirin 980 chip, 8+256GB memory combination, a rear camera with a 48MP main lens, and a front camera with a 24.79MP resolution.

In addition to these features, the Honor V20 will adopt new technologies such as Link Turbo and Eye-Visual Full Screen. At the same time, the phone will also be equipped with 4000mAh battery and AI dual-frequency GPS, support 960-frame super slow motion photography, THE NINE liquid cooling technology, and many more.

Next OPPO is working on a 10x hybrid optical zoom technology