The upcoming smartphone of Huawei’s e-brand is the Honor V20. This handset is considered to be Honor’s version of the newly announced Huawei Nova 4. The launch conference is set to happen in December, though this phone is already available for pre-order. Actually, we know almost everything about it. But as the release date is approaching, it’s logical we will get more information about its features. Today, we have already managed to get acquainted with the GeekBench score. Later, the manufacturer released a poster, informing the V20 will be equipped with THE NINE liquid cooling technology. If you remember, this technology was uncovered at the Honor Note 10 conference. 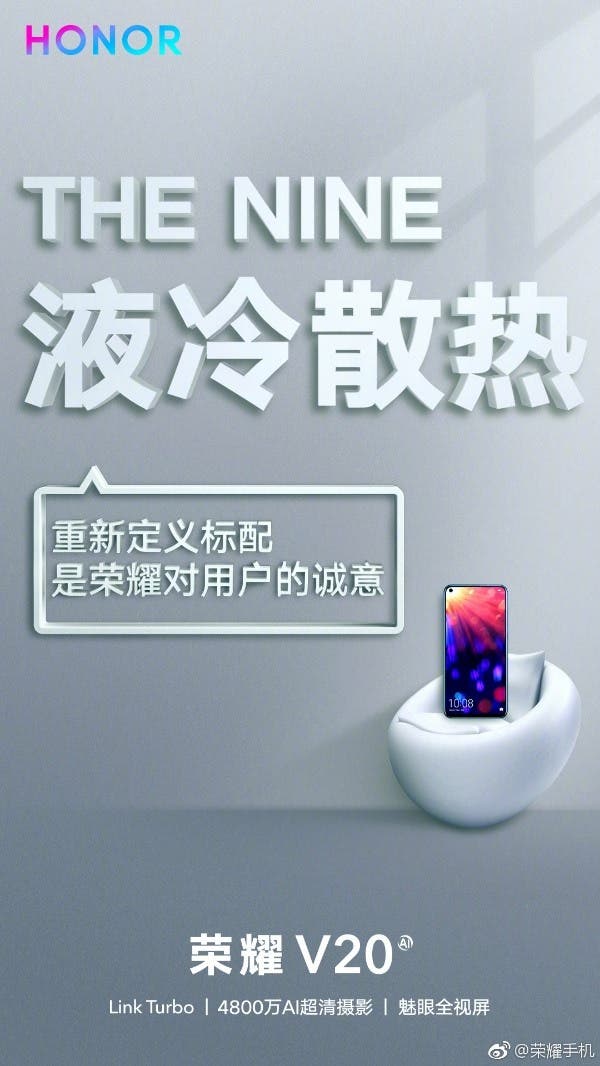 According to the previously announced features of THE NINE liquid cooling technology, it uses a nine-layer thermal design, and a PC-grade liquid cooling pipe that promises 41% increase in heat dissipation and CPU temperature reduction of up to 10° C. These technologies are said to enhance the performance of the device, especially during intense gaming sessions. This amazing technology will become available on the Honor V20 as well. Compared to the Honor Note 10, the Honor V20 heat pipe may be relatively short.

Moreover, according to the previously leaked and showed information, the Honor V20 will sport a 48MP AI ultra-clear photography technology, Link Turbo, and the ‘Eye Technology’. In addition, the company has also revealed that the Honor V20 will support 960fps video shooting. The Huawei P20 series is the first Chinese phone to use this feature on a smartphone. The Huawei Mate 10 series also got this feature. The 960-frame super slow-motion function extends the 0.2-second video to 8 seconds, maximizing the slow playback of the video.