The Honor V20 has been embroiled in a series of leaks, and as the device launches in a few hours from now, we have a new leak from China that appears to have given us the last look at the supposed images before its final launch today.

The poster you see below is that of a promotional poster of the Honor V20 revealing the phone’s design and a few specifications which we already know. Notably, the device as we reported a while back will come in three color variants –  including Gray, Red, and Blue.

Moving on to the flip side of the device, it can be seen clearly that it will come with a triple rear camera setup as well as a rear fingerprint sensor, so it is pretty now settled that the device would miss out on the in-display finger scanner, unless of course, the Honor sub-brand is also preparing a more premium variant of the device.

On the display front, the poster reveals that the upcoming Honor V20 will adopt the Infinity-O type display which utilizes a punch-hole display where the in-display camera sensor will be placed.

Along with the leaked image, the poster also revealed some basic specs details about the device. While we already know a bit of the info, the poster confirms that the device will use the company’s own Kirin 980 octa-core processor with at least 8GB RAM, 128GB and 256GB STORAGE.

Huawei is expected to fit a 48-megapixel Sony IMX586 main camera sensor into the device and in addition to that, indications emerged earlier this week that the Honor V20 may be equipped with a ToF 3D lens. A ToF camera (Time-of-Flight camera) is a range imaging camera system that resolves distance based on the known speed of light, measuring the time-of-flight of a light signal between the camera and the subject for each point of the image. The device, when launched, could also be the first Honor device to come with 960 FPS slow-motion video recording, a feature previously exclusive to flagships such as the Sony Xperia XZ Premium, Huawei P20 Pro, and Samsung’s 2018 flagships – Galaxy S9, S9+, and Note9. 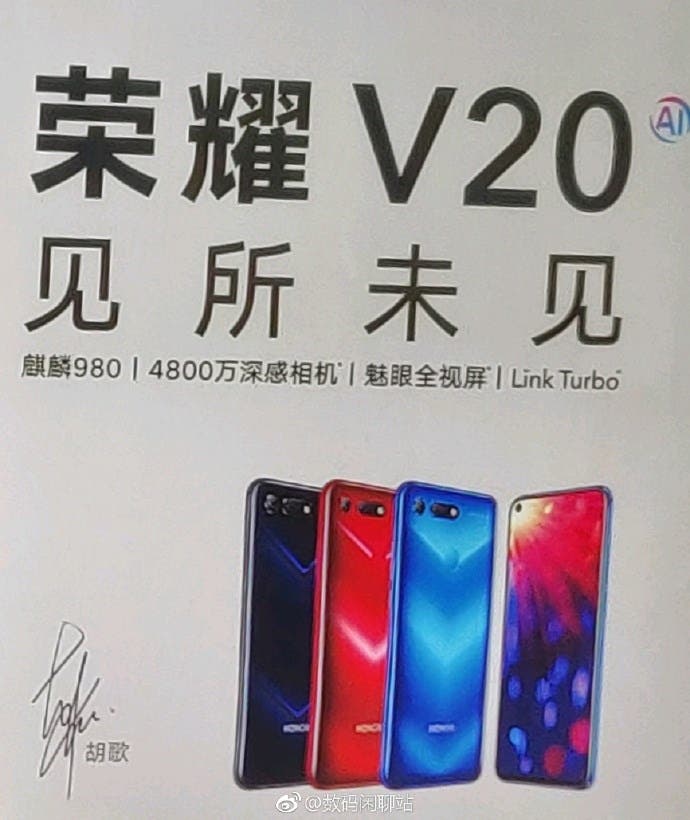