On December 26, the 2018 OPPO Developers Conference was held at the National Convention Center. Liu Chang, vice president of OPPO and dean of the institute, delivered a keynote speech, titled ‘Technology Reshapes the Future’, where developers and industry partners were informed about the smartphone industry and future technologies.

In terms of artificial intelligence, it has been very popular in the past two years. AI can identify analog signals and then convert them into digital signals for smartphone processing. Artificial intelligence can understand the world of people and then serve users better. The new intelligent voice assistant Breeno, which was unveiled at the forum, will bring us a better experience. 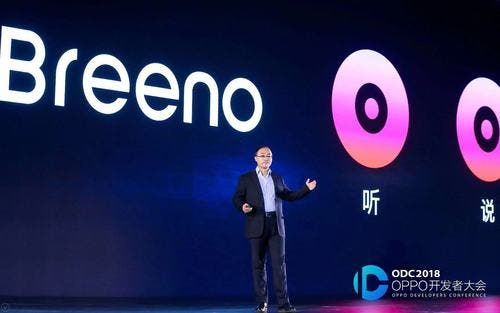 In terms of data analysis, the phones will analyze the multi-dimensional data of the user in the future that will let the machine understand the user’s life and habits, and then give timely and appropriate suggestions. On the Color OS 6, there is an intelligent power-saving mode that freezes background apps by learning the user’s habits.

In the 5G era, the Internet of Everything became a major trend, and the combination of 5G and AI, cloud computing, AR and other technologies have already started the era of 5G+. OPPO uses smartphones as the main smart terminals and works with developers and partners to create new services for ‘family’ and ‘health’. Liu Chang said that OPPO, as a tech company, will be committed to the breakthrough of basic technology, drive the technical layout with user needs, and bring revolutionary, simple and convenient experience to users. It truly brings a world of user-centered 5G+.