Huawei just wrapped up 2018 on a high with the excellent Mate 20 Pro that bagged awards across the globe. However, we’re now in 2019, and the world number two smartphone is on its way to prepping for another flagship – the Huawei P30 – successor of the world’s first triple camera smartphone, the Huawei P20. Today, a leaked CAD render of the said handset has revealed all angles of the device. The leak comes from Steve Hemmerstoffer, otherwise known as @Onleaks in the Twitterverse in collaboration with 91mobiles. 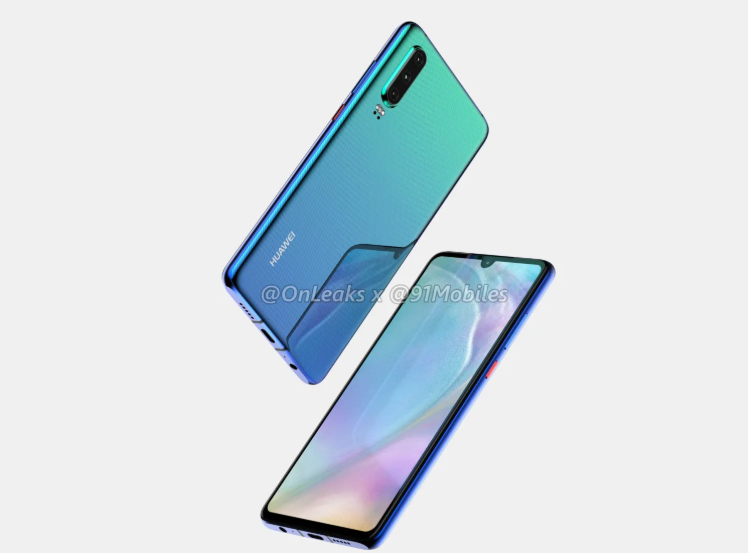 Beginning with the front, there’s a teardrop notch design with very slim bezels and the display size is expected to be 6.0-inches with Full-HD+ resolution. Also, you might not notice that the leaked render shows the return of a 3.5mm headphone jack which was missing on the P20. The rear is business as usual with a triple camera setup and gradient colours of the Huawei P30 hogging the spotlight. There’s no sign of the physical fingerprint reader on the back which leads us to think it will be underneath the screen.

While the rear camera looks identical to the previous generation, it’s sensors could be different. Talk around town is that a 38MP RGB sensor will be on board the rear capable of 5x optical zoom. The phone measures 149.1 x 71.4 x 7.5mm and the girth of the Huawei P30 is increased to 9.3mm from 7.5mm. This indicates that we could see a big battery similar to the Mate 20 Pro on the handset. There’s no word on the launch of the handset yet but if we’re lucky we could see a glimpse of it at the MWC 2019 in February.

Next 6 reasons why you shouldn't miss the new KXD K30