On December 27, Xiaomi launched the Mijia Smart Washing Machine at 1999 yuan ($291). It went on sale at 10:00 AM on January 4 (today). But as expected, Xiaomi Mall has officially announced through its Weibo channel that the Mijia Internet washing and drying machine was sold out in only 3 minutes and 5 seconds. The next round of sale will be at 10:00 on January 18, and the price will remain the same at 1999 yuan. 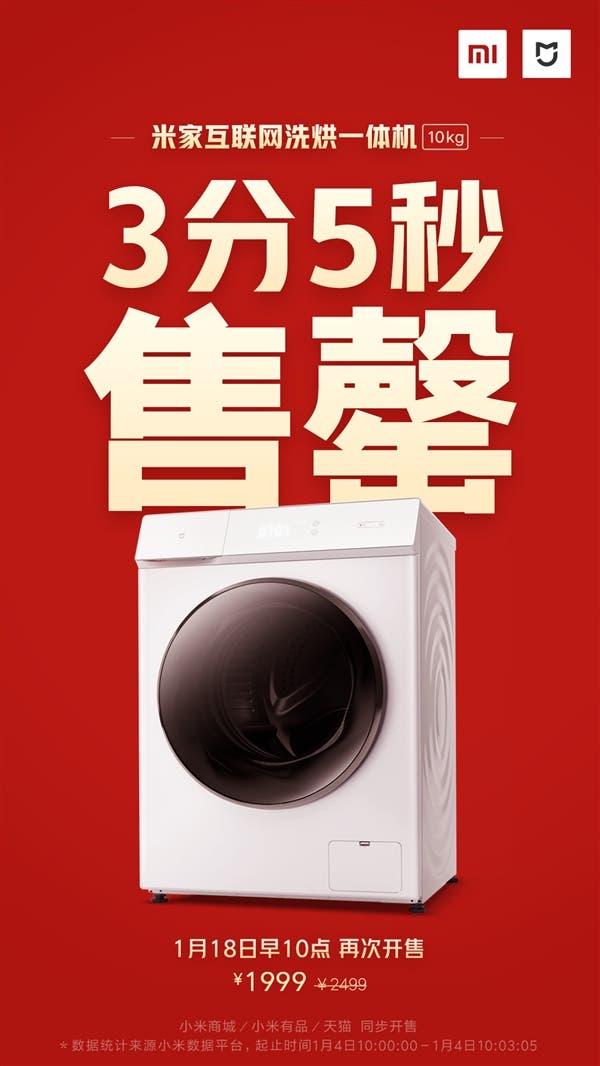 According to the official introduction, the Mijia Internet washing and drying machine has achieved the highest A+ washing capacity of the national standard. Specifically, the Mijia Smart Washing Machine simulates the hand-washing, smashing, wringing and shaking process with higher intensity and higher frequency. Actually, the washing ratio reaches 1.11 super-high value and meets the A+ level capability requirement.

Not only that, the Mijia Internet washing and drying machine adopts a micro-steam care technology, which allows the hot air at a wind speed of 18m/s to penetrate the fabric in the laundry cabin. It also removes 99% of the bacteria while strong winds blow away the dust.

More importantly, it uses the industry-leading BLDC variable frequency motor to precisely control the washing rhythm, to provide stable and efficient performance, and it is more energy-efficient and quieter. The maximum dehydration speed is 1400 rpm, and the dehydration and drying time is way faster and more efficient than that of the most washing machines on the market.

In addition, the Mijia Internet washing and drying machine can adjust more settings through the Mijia App to achieve the desired cleaning results. It comes with scheduled washing, switch child lock, mute setting and more.