Meizu’s forums are quite a reliable source of news related to new smartphones coming from the company. Recently, Meizu’s CEO Jack Wong confirmed that the Meizu Note 9 is certainly real and will pack some pretty formidable specs for a mid-ranger in 2019. Now, the company CEO has also revealed that the handset will have a big battery. 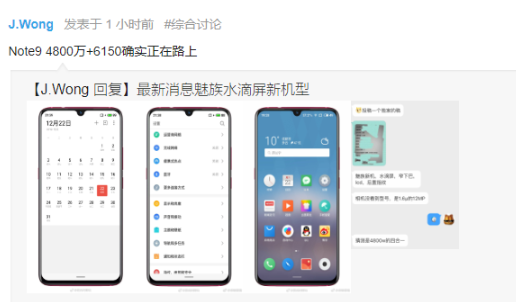 When some Meizu forum users posted leaked photos of the Meizu Note 9, the Meizu CEO commented by revealing some specifications of the unreleased handset. Now, as per the executive, the Meizu Note 9 will rock a 4,000mAh battery. Previously, it was revealed that the Meizu Note 9 would feature a 48MP rear shooter and a new Snapdragon 6150 SoC based on the 11nm process. The 48MP sensor is likely Sony’s IMX586 that has already found its way on the Honor V20 and a couple of other devices.

If the leaked renders on the forum are anything to go by, the Meizu Note 9 could feature a water-drop notch and a very slim bottom bezel. Launch dates are not known but Meizu just recently announced the Note 8 so it’s not a very ideal time to launch its successor.

Next Honor Play 8A is official with MediaTek P35