After the Xiaomi Black Shark Skywalker with Snapdragon 855 appeared on Geekbench, another Xiaomi flagship with the Snapdragon 855 SoC has now been listed. The device comes with the name “Xiaomi Cepheus” and from its scores, the processor is most likely the recently released 7nm chip, Snapdragon 855. Geekbench does not specifically tell what chip is coming with the phone it lists but from the running points, this information can be deduced. The Xiaomi Cepheus smartphone has scored 3,475 and 10,872 points in single-core and multi-core tests respectively on Geekbench and this high benchmark scores suggest that it will be powered by the SD855 SoC. 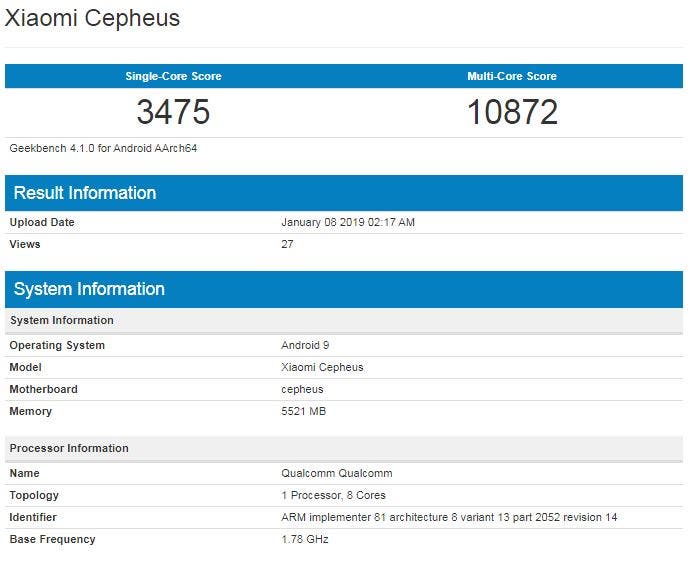 According to the listing, this smartphone comes with 6GB of RAM and the internal storage is not known for now. It runs on Google latest system, Android 9 Pie but the specific phone which “Xiaomi Cepheus” depicts is not known. We know that the company will release at least four Snapdragon 855 smartphones this year. The 5G version of the Mi MIX 3 has been widely publicized while the Xiaomi Mi 9, Xiaomi Mi MIX 4 and Xiaomi Black Shark Skywalker are all expected to use the SD855 SoC. Since the nomenclature of the MIX 3 5G version and Black Shark Skywalker are known, this “Xiaomi Cepheus” could either be Xiaomi Mi 9 or Xiaomi Mi MIX 4.