Motorola has officially announced the world’s first smartphone supporting the 5G network – the Motorola Z3 – at the CES fair currently taking place in Las Vegas. According to official sources, with its 5G module, the motorola z3 is will be up to 10 times faster than what we have on existing networks.

The Motorola Z3 was released in August 2018, but due to its modular design typical of the Z series, it’s now possible to add in a 5G modem and have it connected with the latest connectivity standard.

The rest of the hardware on the Motorola Z3 remains unchanged, going from the 6.01-inch Super AMOLED display to the Qualcomm Snapdragon 835 processor. There are also 6GB of RAM, 128GB of storage, a front-facing 8 megapixel camera and a dual 12-megapixel rear shooters. Battery capacity tops at just 3000mAh. 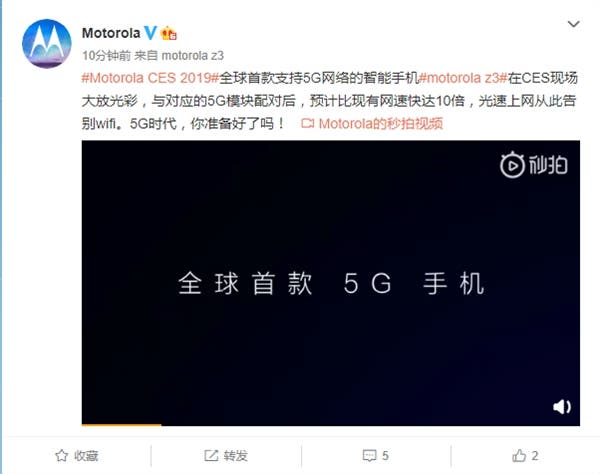 It is worth noting that Motorola also provides the battery module for the Motorola Z3, which packs 2220mAh to provide additional autonomy.

Without the module, the z3 is quite slim at just 6.75mm of thickness, with the fingerprint scanner is integrated in the side power button.

Unfortunately, the Motorola has not announced the actual release date for the 5G module, stay tuned to learn more about that.

Previous Twilight OUKITEL U25 Pro discounted on Aliexpress only to $96.24