Just yesterday, VIVO India sent out media invites to the launch of a  smartphone in India, with a subtle hint that suggests the device in question could be one with a pop-up selfie camera similar to the one seen on the VIVO NEX. Although there have been murmurs that the said device could be the VIVO V15 Pro, VIVO has yet to confirm that. Now, ahead of the VIVOs India launch date, a VIVO branded device with the has appeared on Thailand’s NBTC certification agency.

What’s special about the device? well, the device has the  Vivo 1818 model number, and as you can see from the image below, it indicates the model number is associated with the VIVIO V15 Pro moniker. This essentially confirms the vivo V15 moniker that could be heading to India soon. This isn’t the first time the VIVO 1818 model number, the device first appeared on the EEC website but with little or no details.

The VIVO V15 Pro will highlight a pop-up camera, triple rear camera and of course the elevating selfie camera. More details will be unearthed in the days leading to the launch date -February 20th. 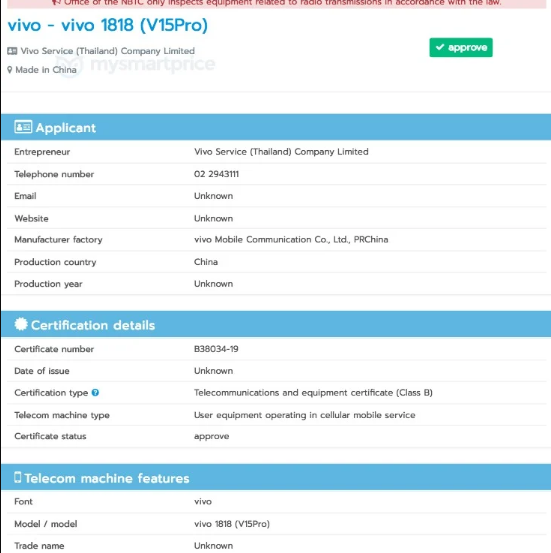