We already know that Vivo is going to take the wraps off Vivo V15 Pro at an event held in India on February 20. The smartphone has been a target of multiple leaks in recent days and even was featured in a teaser image shared by the BBK-owned company, alongside a case for the upcoming device. Today, a new leak came out, this time it’s an official promo poster showing the device in all its glory. 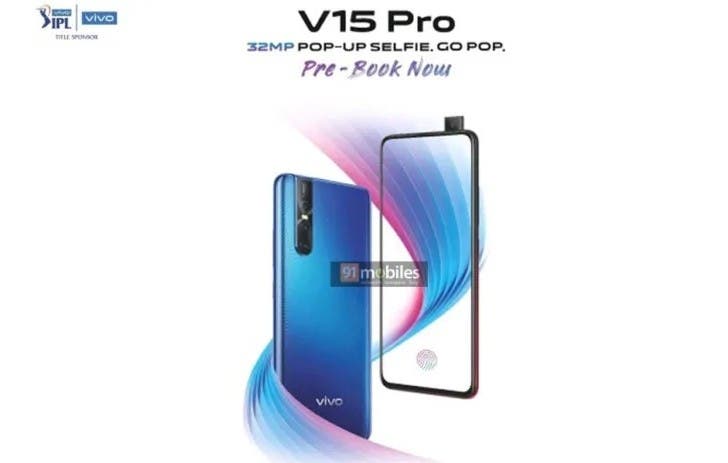 The poster confirms previous speculation that pointed that the Vivo V15 Pro would come with a bezel-less full-screen design featuring an in-display fingerprint scanner. Judging by the images, the handset indeed carries slim bezels, but the chin is slightly more pronounced. In order to achieve this full-screen design, Vivo will be introducing a pop-out 32MP selfie snapper.

On the back of the device, we can see a blue gradient finish with Vivo’s logo on the bottom. The leaked poster also confirms the presence of a triple-camera setup with a dual-LED flash on the rear. The devices have rounded corners and a curved back panel.

As previously mentioned, the announcement will happen on February 20, but the pre-bookings in India are supposed to start on February 15. While the price hasn’t been revealed, rumors point out to a pricing tag that sits below INR 25,000 (~$1776,34).