Every month, AnTuTu releases the list of smartphones with the most powerful performance. January is no exception. Today, this benchmark platform launched the list of Chinese smartphones.  Well, the toppest position of this list is occupied by the new-gen Nubia Red Magic Mars e-Sports game smartphone, which has an average score of 320,996.

The first-gen Nubia Red Magic was packed with a Snapdragon 835, and it couldn’t make a competition to its rivals. But the second generation model is equipped with the Snapdragon 845 chip, which is considered to be the world’s most powerful SoC used in the Android camp. As a game smartphone, it’s logical to expect this handset should have a cooling system. In fact, the Nubia Red Magic Mars adopts a cooling solution combining air-cooling, copper-pipe liquid cooling and three-layer graphite bonding to form an ICE multi-dimensional heat dissipation system, which makes the CPU heat dissipation efficiency 25 times higher and maintain strong performance for a long time. 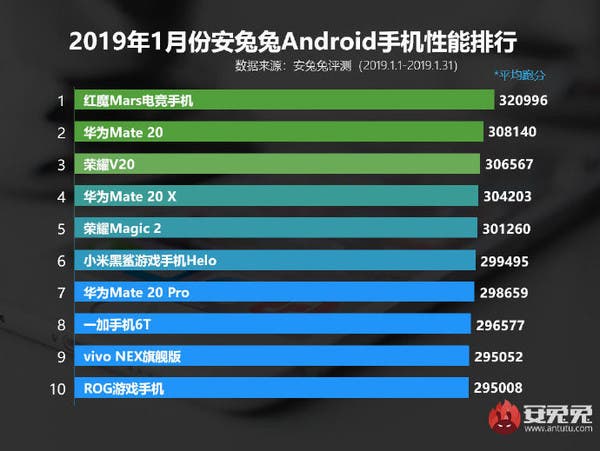 Huawei’s five phones packed with its own Kirin 980 mobile platform occupy ‘half the sky’. The positions from 2 to 5 belong to the Huawei Mate 20, HonorV20, Huawei Mate 20 X, and Honor Magic 2, respectively, while the Huawei Mate 20 Pro ranks seventh. In fact, Huawei smartphones’ average score should be higher, but because the phones do not turn on the performance mode by default, it lowers the average running score of several models.

The Xiaomi Black Shark Halo game smartphone ranked sixth, the OnePlus 6T ranked eighth, the VIVO NEX flagship version and the ASUS ROG game phone entered the list this month as well. However, the first-gen Black Shark and the much-praised Nubia X are out.

January is likely to be the last glorious moment of Snapdragon 845. With the launch of the Snapdragon 855 mobile platform in this month, this list will change completely.

Previous Xiaomi confirms it is working on a new Black Shark phone , could be Black shark 2