At the MWC 2019 conference, Xiaomi officially released its first 5G smartphone, Xiaomi Mi MIX 3 5G version, which is the second commercial 5G mobile phone in the industry after the Samsung Galaxy S10 5G version. The Xiaomi Mi MIX3 5G comes with the combination of Snapdragon 855 processor + Snapdragon X50 baseband, combined with Xiaomi smart antenna switching technology to achieve a download speed up to 2Gbps. The company also increased the battery capacity from 3300 mAh to 3800 mAh so that it can cope with larger 5G power consumption. 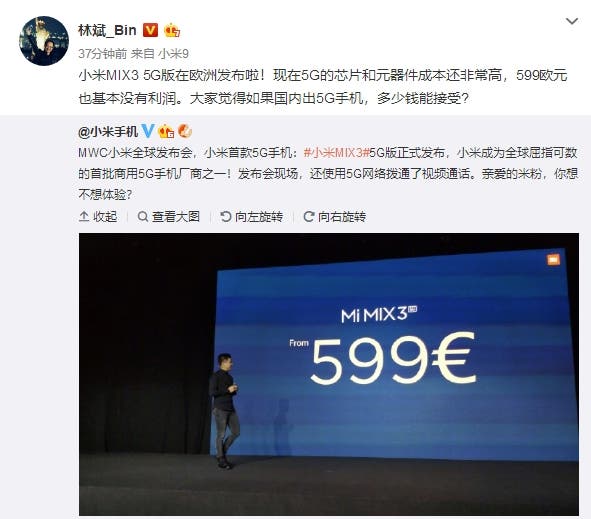 Xiaomi collaborated with a European carrier, Orange, to demonstrate how the Xiaomi Mi MIX 3 5G version performs on a video call. The process was very smooth, and it suggested “true 5G.” The Xiaomi Mi MIX 3 5G version was released in Europe for €599 ($679 or 4560 Yuan). Although it has not been released in China because the country’s 5G development is not complete, there have been questions of how much this device will cost when it eventually arrives.

Xiaomi co-founder and president of Xiaomi, Lin Bin, said that the cost of 5G chips and components is still very high, and the €599 price tag for this smartphone in  Europe yields little or no profit. He also asked netizens to suggest how much they will be willing to pay for this smartphone. Most of the response preferred to pay between 3999 Yuan ($595) and 4999 Yuan ($744).