With the Galaxy A30 and A50 now behind us, there are growing reports that Samsung in the coming months will be introducing more devices to the series – including the rumored Galaxy A40, as well as the top of the show Galaxy A90, A70, and the Galaxy A60. Just over a month since we got the hint that the upcoming Galaxy A60 will feature Samsungs top of the range Infinity-O display, a new leak/report has emerged suggesting that may not be the case.

A leaked specs sheet currently making the round suggests the GalaXY A60 will flaunt a larger 6.7-inch FHD+ Super AMOLED Infinity-U display similar to the A30, and A50. And much like the smaller A50, the upcoming Galaxy A60 will use an in-display fingerprint sensor, perhaps the same optical sensor type of sensor.

Where thing could really get interesting is the device camera configurations. Although the Galaxy A50 already packs a tri-camera setup, the Galaxy A60 will be taking it a notch further as the spec list suggest it will be ditching 25MP sensor on the A50 for a 32-megapixel primary sensor combined with a 5-megapixel depth and 8-megapixel wide-angle camera, while it will retain the smaller sibling’s 25MP front camera sensor. 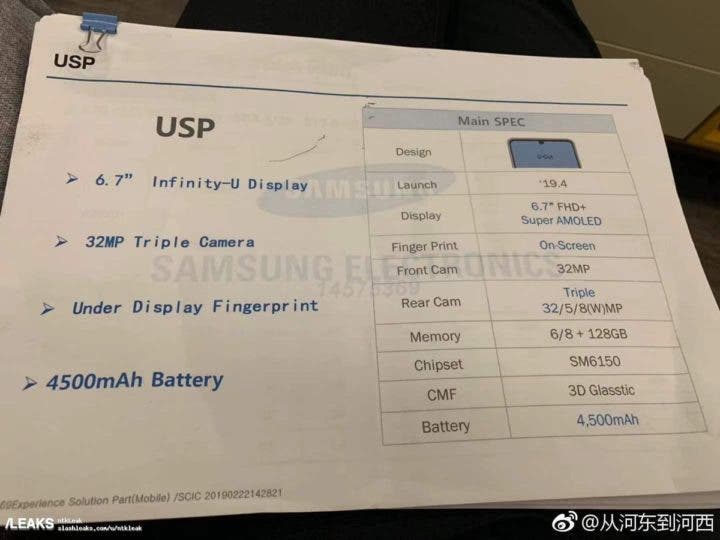 Elsewhere, the device might drop the Exynos 9610 for Qualcomm’s “SM6150” Snapdragon 675 SoC and may come in 6/8GB RAM + 128GB storage configurations. Battery capacity will be upped to 4500mAh, while it is, of course, tipped to boot Android 9 Pie with Samsung’s One UI on top out of the box.

When and where Samsung intends to first drop the Galaxy A60 remains to known.